The first day of issue was 23 MAY 1984. There are 5 covers for this series, four singles and the full set: 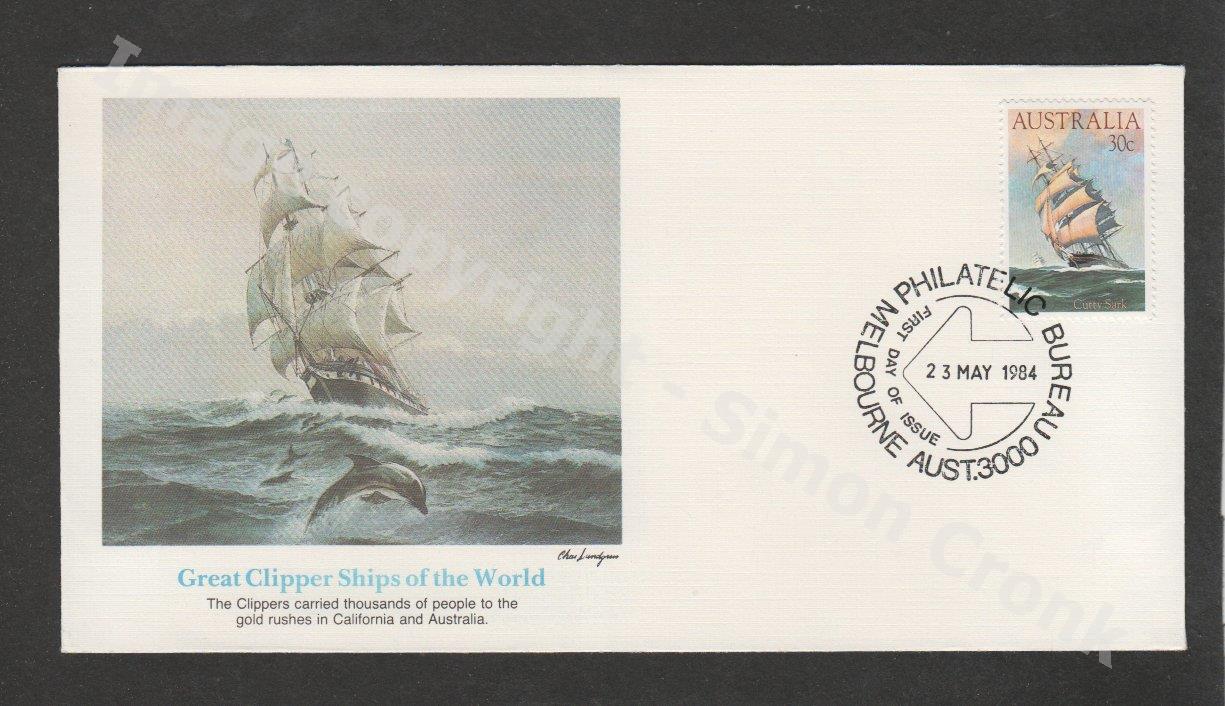 “Three-fourths of an acre of sails manipulated by ten miles of lines helped make the Cutty Sark one of the fastest clipper ships ever built. The ship was owned by Jock Willis white-bearded Scotsman who was one of nineteenth century London’s leading shippers. He wanted a tea clipper faster than any other in the world and the shipbuilder Hercules Linton set out to make that dream a reality. The competitive nature of Willis had been aroused earlier when one of his rivals, George Thompson, claimed that his own clipper Thermopylae was the fastest sailing ship afloat. After a tough loss during the first race with the Thermopylae when rough seas tore the rudder from the Cutty Sark, a second chance came in October of 1885, when both ships were anchored at Sydney Harbor, Australia, taking on cargoes of wool. Leaving two days before the Thermopylae, the Cutty Sark forged ahead through angry seas. A week out of Sydney, she hit a howling squall of snow flurries and hail. The Cutty Sark could not be kept from coming broad- and the next swell and wave of side to the high seas onto her side the sea caused her to make a sickening roll in the icy waters. Shuddering and straining, she righted and the Cutty Sark had herself after the next wave proven that she could handle even the worst of seas. Three months after she initially shoved off, the Cutty Sark made port, a full seven days before the Thermopylae. The Cutty Sark is depicted on the stamp of this First Day and the cachet features the New World, another Cover . of the world’s great sailing ships. “ 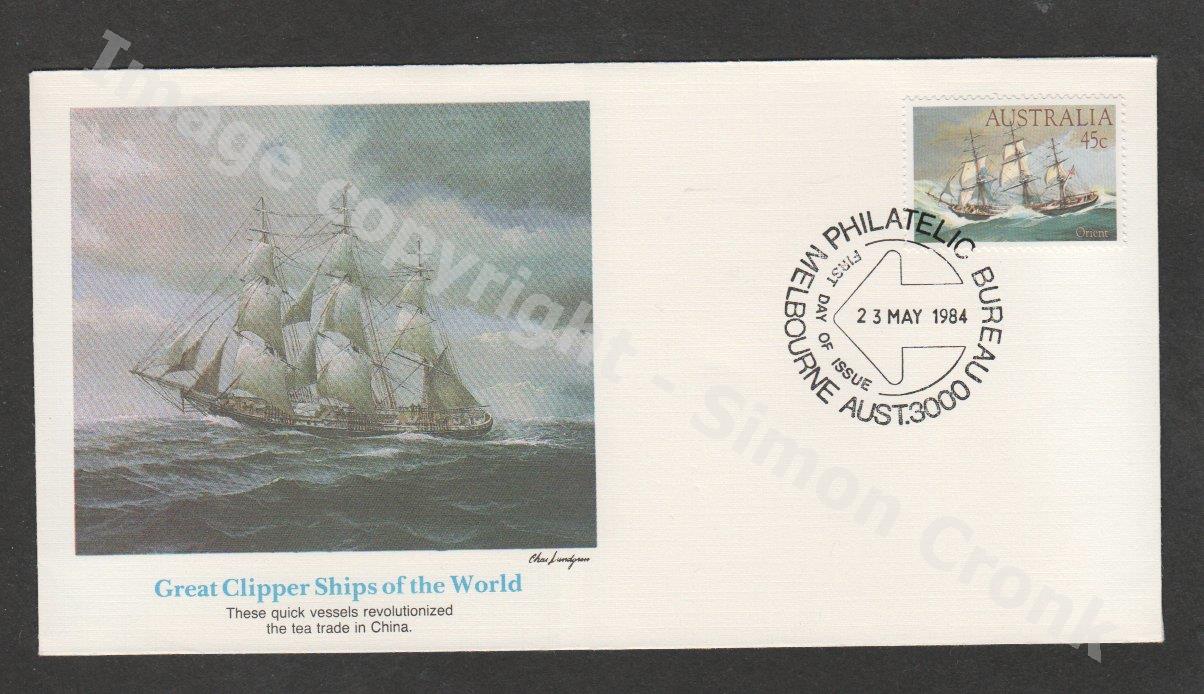 “Early in 1851, rich deposits of gold were discovered in Australia by a prospector seasoned by the California gold rush. Thousands of adventurers longed to travel to Australia to test their luck but very few ships made trips to the Land Down Under. Soon a fleet of swift clipper ships, the kind which were being profitably used in the Orient for the tea trade, began making passenger runs from the populated areas of Europe to Australia. One of these crafts was the with three sturdy masts lifting Orient, built in 1851 high into the air above to support the great sails of the ship. Often, crafts like the Orient had nearly an acre of sail area, controlled by up to fifteen miles of ropes. The Orient was sharp and sleek as it cut through the water, the blue seas churned into white foam by the towering bow. Actually, it was not until 1856, five years after she was launched, that the Orient made her first voyage to Australia. Earlier, in 1853, the Crimean War had broken out between Russia and the allied armies of Great Britain, France, Turkey and Sardinia, over the control of the Holy Places in Jerusalem. The war lasted less than three years, though, and during the next five years, ships like the Orient helped the population of Australia more than double, In honor of the Orient the first on the Australian route for the Orient line of clippers, which soon became the famous Orient Steamship Company Australia issued the stamp featured on this First Day Cover. The cachet bears an original painting of by famous for its “lightning” speed the Lightning acclaimed maritime artist Charles Lundgren.” 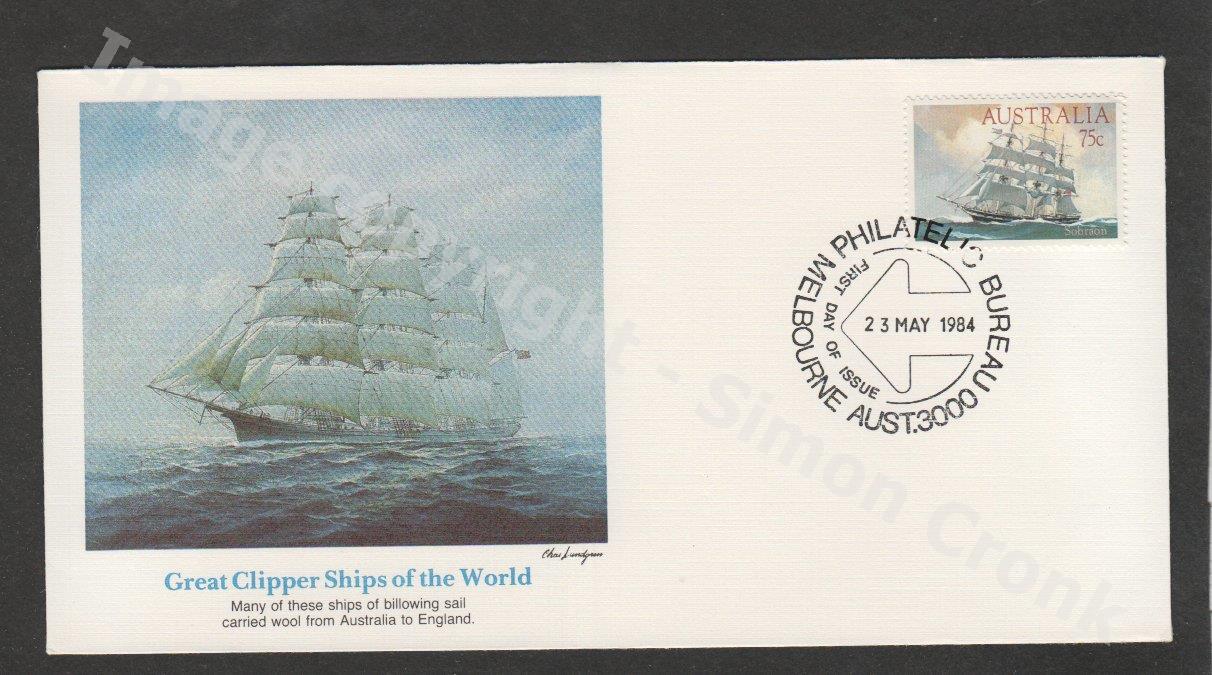 “In 1866 the impressive Sobraon was built by the shipbuilders of Hood of Aberdeen, at Aberdeen, Scotland. She was a massive ship, built with iron frame and beams. The rest of the ship was fashioned in solid teakwood, a hard, yellowish brown wood ideal for the harsh environment of salt and and she was the largest of dampness from the ocean . her kind ever built of this composite wood and metal con- struction. The rich lands of Australia and the great numbers of people who wanted to go there were the reasons the Sobraon was built. Fortune seekers hoped to venture to Australia and pan for rich gold deposits which had been discovered on the continent in 1851. For this reason, thousands of people sold most of what they owned, so they could afford the passage to Australia. The lands of Australia were also rich in pastures which are ideal for raising sheep. Consequently, the Sobraon did not have to return to her bundles of wool were home port with an empty hold carried home for sale in London. The Sobraon followed this carrying passengers to Australia routine for some years and returning to England laden with Australian wool until 1891, when she was sold to the Government of New South Wales. There, she was used as a reform ship for boys until 1911 when she was bought by the Federal Government, becoming the Royal Australian Navy’s first training ship. In honor of the Sobraon,Australia issued the stamp featured on this First Day Cover. Charles Lundgren created the original painting of the Great Republic featured in the cachet of this First Day Cover.” 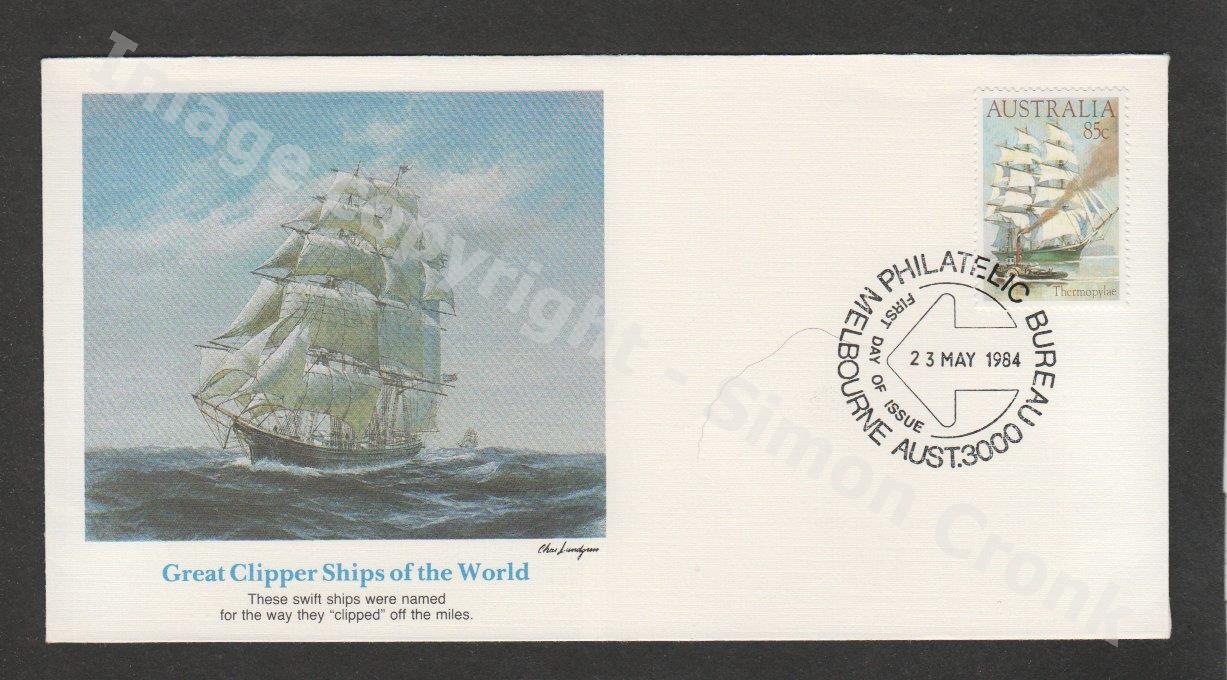 “In 1868 the magnificent Thermopylae was built by the shipbuilders at Hood of Aberdeen and her proud ship- owner — George Thompson claimed that she would become the swiftest sailing ship afloat. And indeed he was not far from the truth, for the new designs of the clipper ships made them faster, safer and more reliable. The first real chance to prove the supremacy of the Thermopylae came in 1872, when she and another ship — the Cutty Sark were both leaving Shanghai with cargoes of tea. The Cutty Sark had been built for Jock Willis a white-bearded Scotsman who was one of nineteenth century London’s leading shippers. Willis also claimed to have a tea clipper faster than any other in the world, and the sailing record of his ship hinted that the race would be a close one. The two swift clippers left the mouth of the Shanghai River on June 18, 1872 and started the long journey to London. At the end of two weeks the Cutty Sark had a four hundred mile lead But on August ninth the Indian Ocean was churning and the Cutty Sark suffered torn under a heavy gale rigging and the loss of the rudder. For four days the stricken ship bobbed and lurched in the rough seas as the crew repaired the sail and jury rigged a new rudder. Meanwhile, the Thermopylae was making impressive time as she rounded the Cape of Good Hope and set her heading for home port. With the crippled Cutty Sark far behind, the Thermopylae docked in London, the triumphant winner of the grueling race. The Thermopylae is featured on the stamp of this Cover and the cachet bears a painting of the Flying Cloud.” 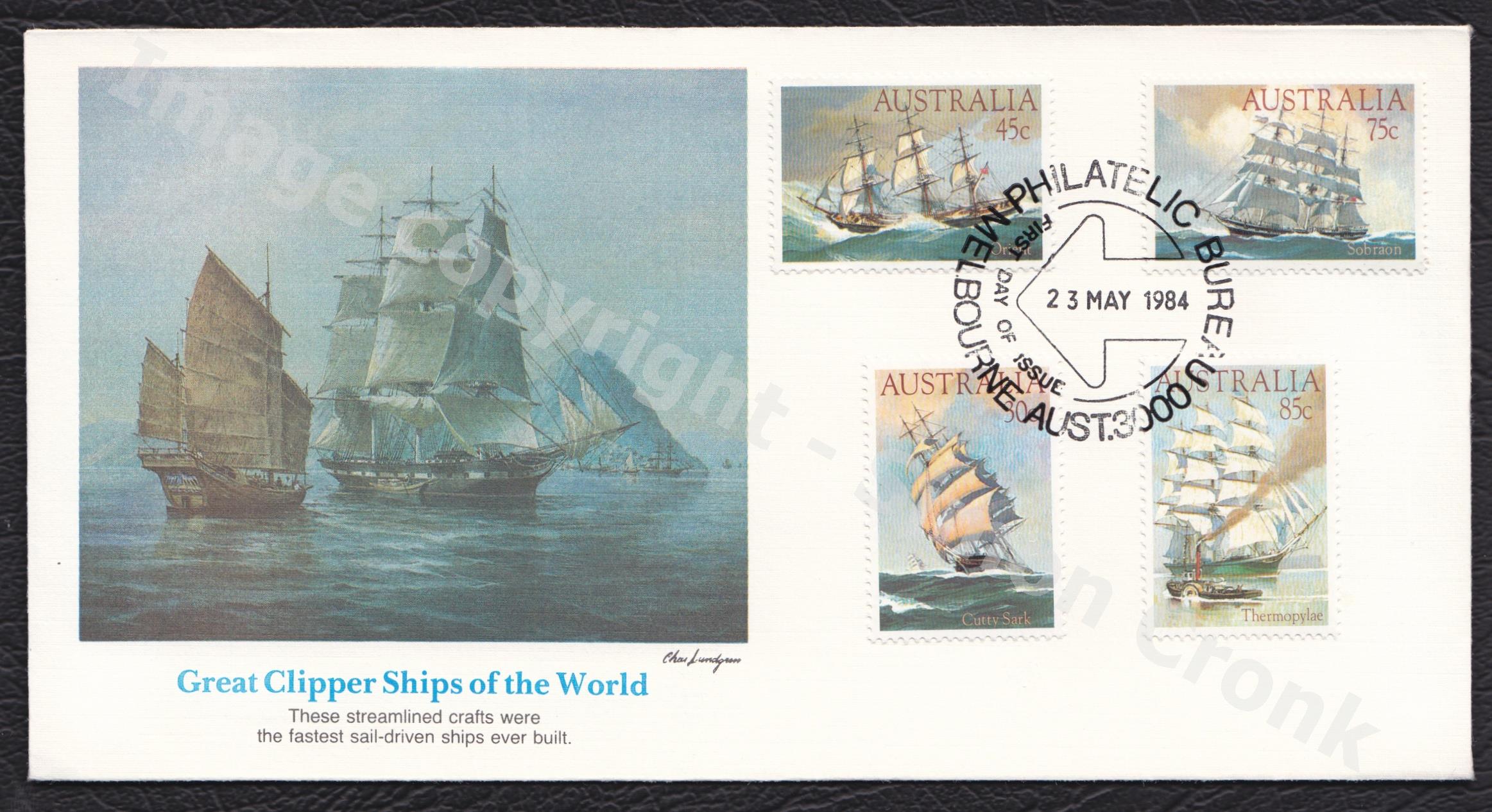 “The great clipper ships of the nineteenth century find their roots in of all things the Opium Wars. The Treaty of Nanking ended the fighting between the British and Chinese and granted England trading rights at several Chinese cities. With the opening of the ports to ships from the Western World, the tea trade flourished. However, before the construction of the Suez Canal, ships took over a half of a year to reach London, and often the tea would become musty. What was needed was a faster kind of craft, one which could “clip” through the water and thus, the “clipper ship” was borne In honour of the swift clipper ships of the past, Australia issued the stamps featured on this First Day Cover. The cachet features an original painting of the Rain- bow by artist Charles Lundgren. Charles Lundgren is recognised as one of the world’s foremost maritime artists, for his paintings dramatically evoke the feel of wind and sail. His works hang in the National Gallery in Washington, DOC., in the Philadelphia Maritime Museum and many others. In this magnificent series of paintings, Charles Lundgren brings to life that proud but fleeting era of the Great Clipper Ships of the World. “

Some more information about the cachet design artist Charles Lundgren from the Unicover website: