The first day of issue was 17 FEB 1982. There are 2 covers for this series, one 24c and one 60c stamp. Unfortunately they didn’t make all 4 covers (there are 4 stamps in the set) which is a real shame. 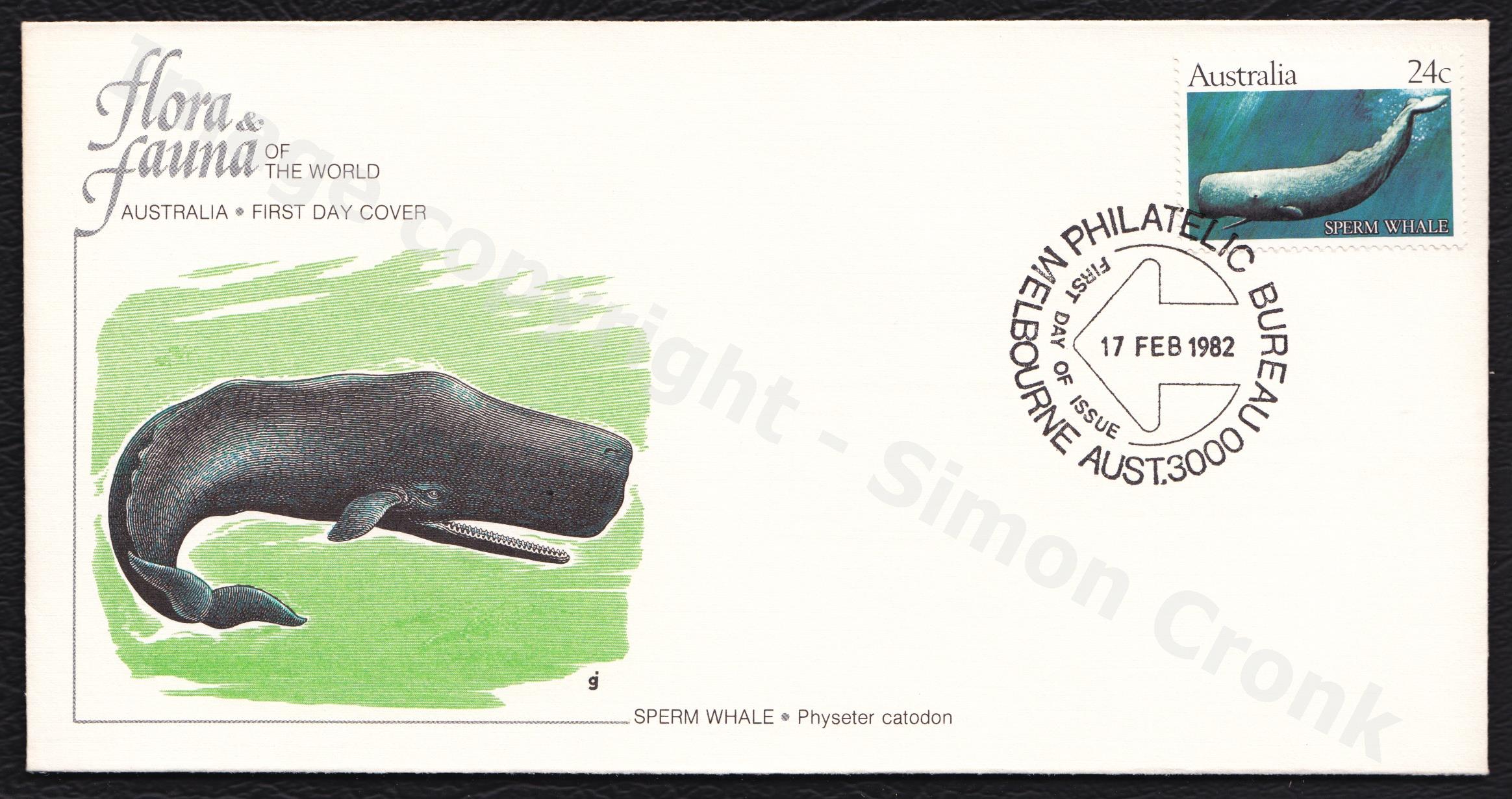 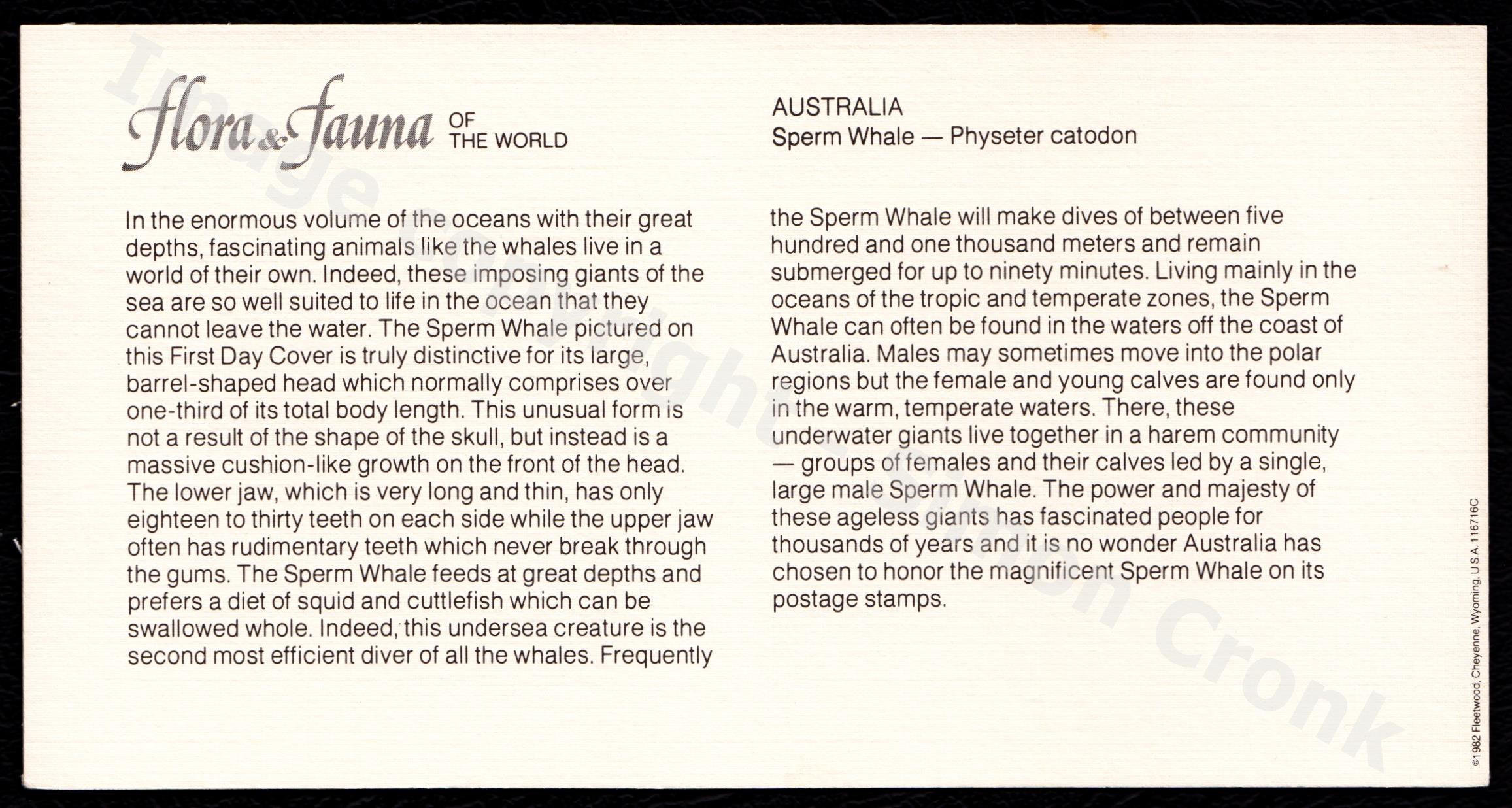 “Sperm Whale — Physeter catodon – In the enormous volume of the oceans with their great depths, fascinating animals like the whales live in a world of their own. Indeed, these imposing giants of the sea are so well suited to life in the ocean that they cannot leave the water. The Sperm Whale pictured on this First Day Cover is truly distinctive for its large, barrel-shaped head which normally comprises over one-third of its total body length, This unusual form is not a result of the shape of the skull, but instead is a massive cushion-like growth on the front of the head. The lower jaw, which is very long and thin, has only eighteen to thirty teeth on each side while the upper often has rudimentary teeth which never break through the gums. The Sperm Whale feeds at great depths and prefers a diet of squid and cuttlefish which can be swallowed whole. Indeed, this undersea creature ‘is the second most efficient diver of all the whales. Frequently the Sperm Whale will make dives Of between five hundred and one thousand meters and remain submerged for up to ninety minutes, Living mainly in the oceans of the tropic and temperate zones, the Sperm Whale can often be found in the waters off the coast of Australia, Males may sometimes move into the polar regions but the female and young calves are found only in the warrn, ternperate waters. There, these underwater giants live together in a harem community groups of females and their calves led by a single, large male Sperm Whale. The power and majesty of these ageless giants has fascinated people for thousands of years and it is no wonder Australia has chosen to honor the magnificent Sperm Whale on its postage stamps. “ 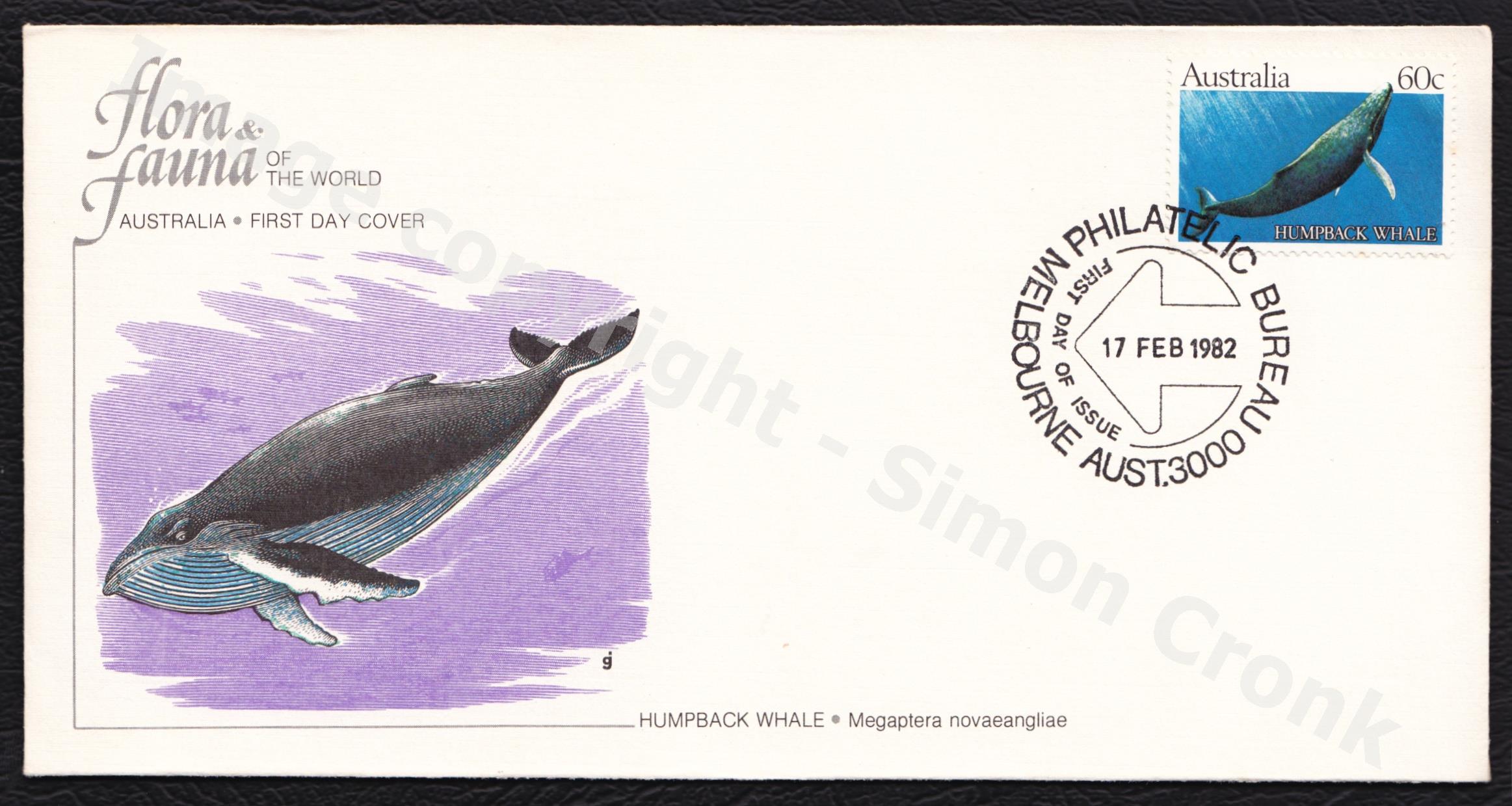 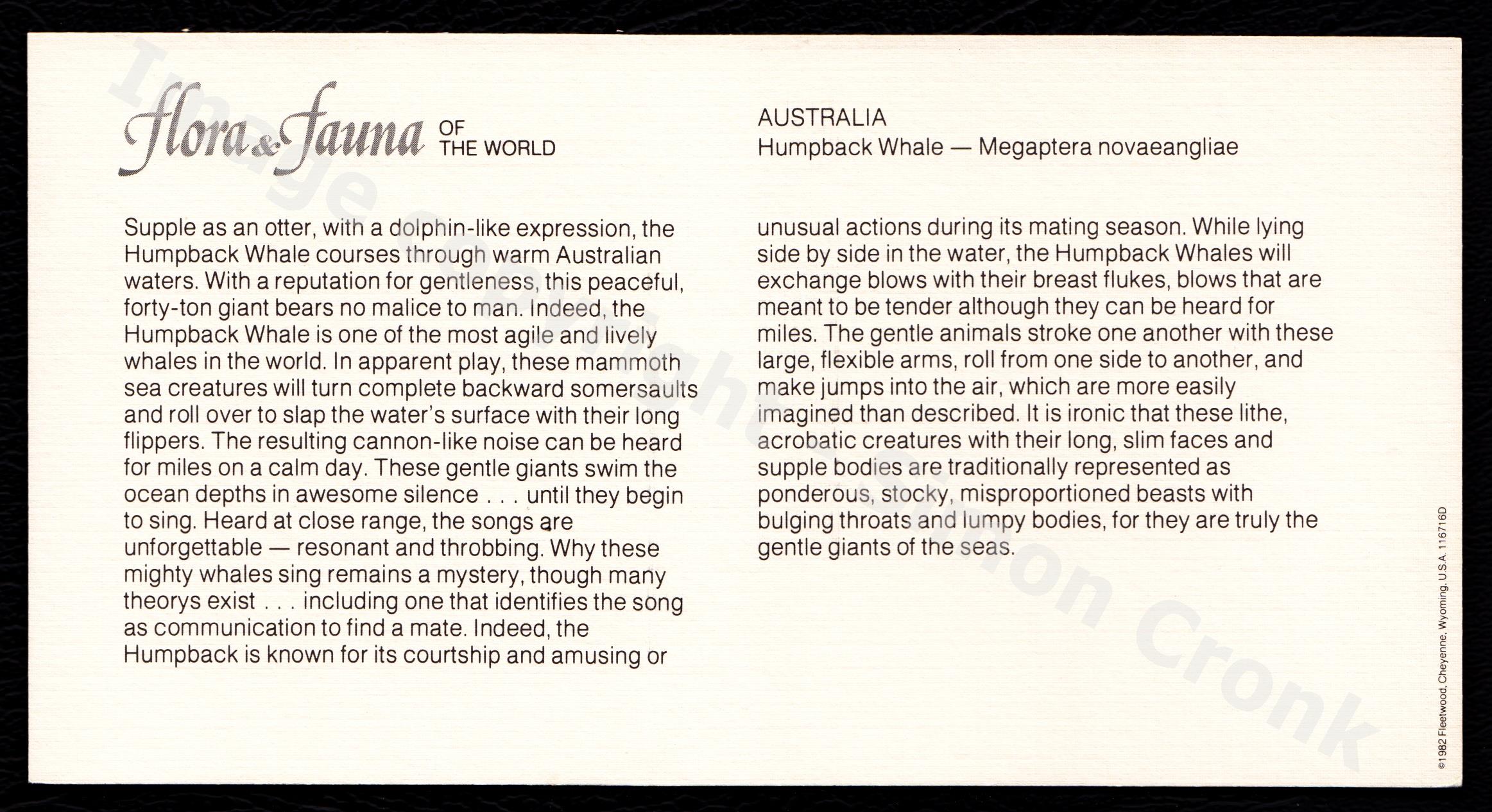 “Humpback Whale — Megaptera novaeangliae – Supple as an otter, with a dolphin-like expression, the Humpback Whale courses through warm Australian waters. With a reputation for gentleness, this peaceful, forty-ton giant bears no malice to man, Indeed, the Humpback Whale is one of the most agile and lively whales in the world In apparent play, these mammoth sea creatures will turn complete backward somersaults and roll over to slap the water’s surface with their long flippers. The resulting cannon-like noise can be heard for miles on a calm day. These gentle giants swim the ocean depths in awesome silence until they begin to singe Heard at close range, the songs are unforgettable — resonant and throbbing. Why these mighty whales sing remains a mystery, though many including one that identifies the song theorys exist as communication to find a mate. Indeed, the Humpback is known for its courtship and amusing or unusual actions during its mating season. While lying side by side in the water, the Humpback Whales will exchange blows with their breast flukes, blows that are meant to be tender although they can be heard for miles. The gentle animals stroke one another with these large, flexible arms, roll from one side to another, and make jumps into the air, which are more easily imagined than described. It is ironic that these lithe, acrobatic creatures with their long, slim faces and supple bodies are traditionally represented as ponderous, stocky, misproportioned beasts with bulging throats and lumpy bodies, for they are truly the gentle giants of the seas.”

I have the original black & white Gene Jarvis cachet design artwork for both these covers here with me in Australia.

Here is some information from the Unicover website about Gene Jarvis: