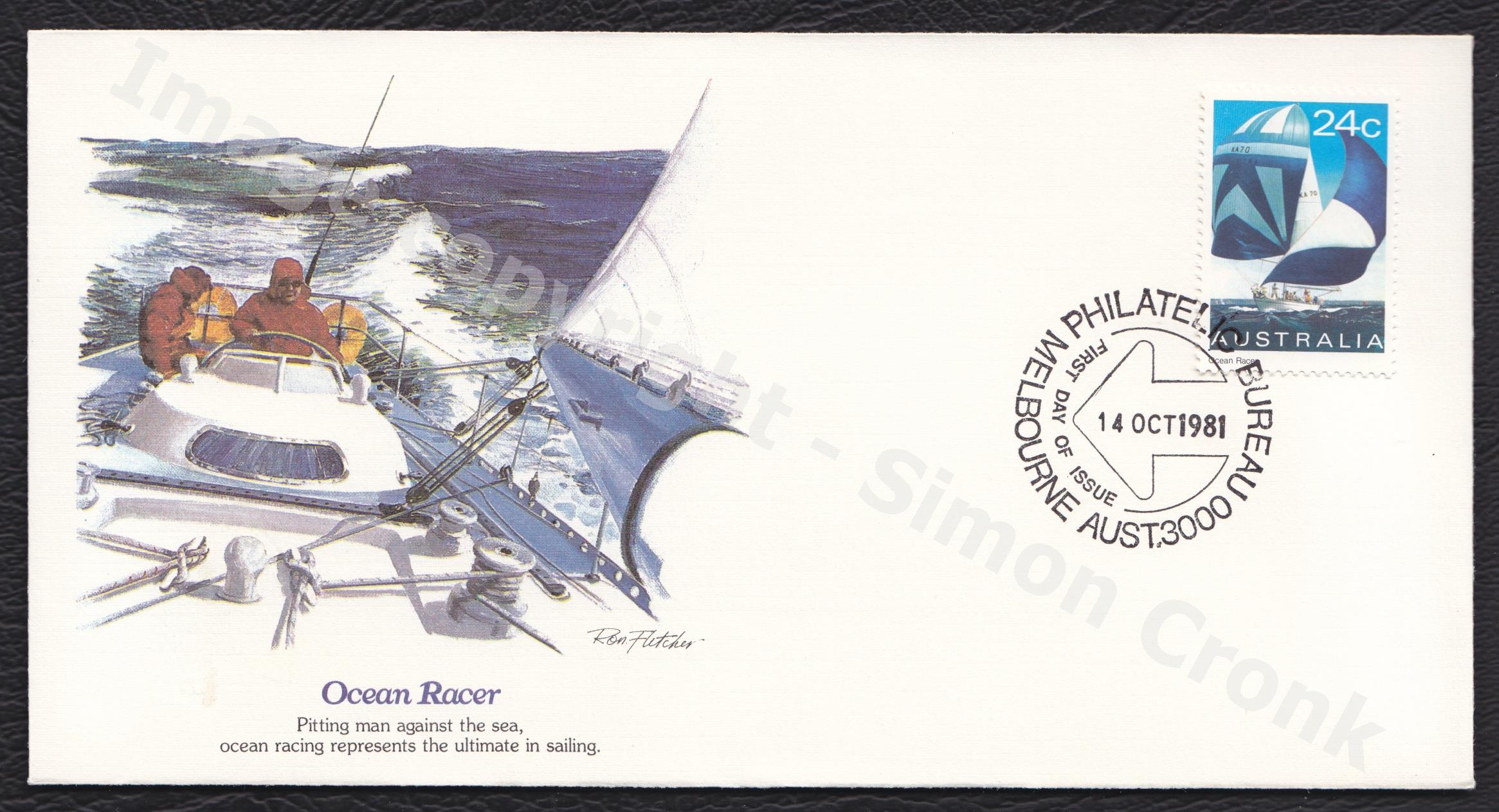 “To many boatmen, ocean racing represents the ultimate in sailing. Courses may be thousands of miles long, and the contestants must endure day and night. And, as the painting on this First Day Cover shows, they often race in winds that would easily prevent any inshore contest. Ocean Racers range in size from about twenty-one feet to seventy-two feet in length with beams of between nine and eighteen feet. Their weight may vary between four and thirty tons. Crews may consist of as few as four members, while some of the largest yachts require more than twenty to man theme The smaller yachts compete in regular offshore races, and there are state and national championships for Ocean Racers up to twenty-seven feet in length. The most widely known ocean race sailed in Australian waters is the annual Sydney to Hobart contest. Ocean racing not only has provided competition of the highest calibre, attracting many of the world’s finest yachtsmen, but it also has resulted in the development of a unique type of yacht. The Ocean Racer combines excellent cruising accommodations and the ability to go to sea in all types of weather. Ironically, in this sport that requires a working knowledge of the open sea, all skippers, navigators and about ninety percent of the crews are amateurs.” 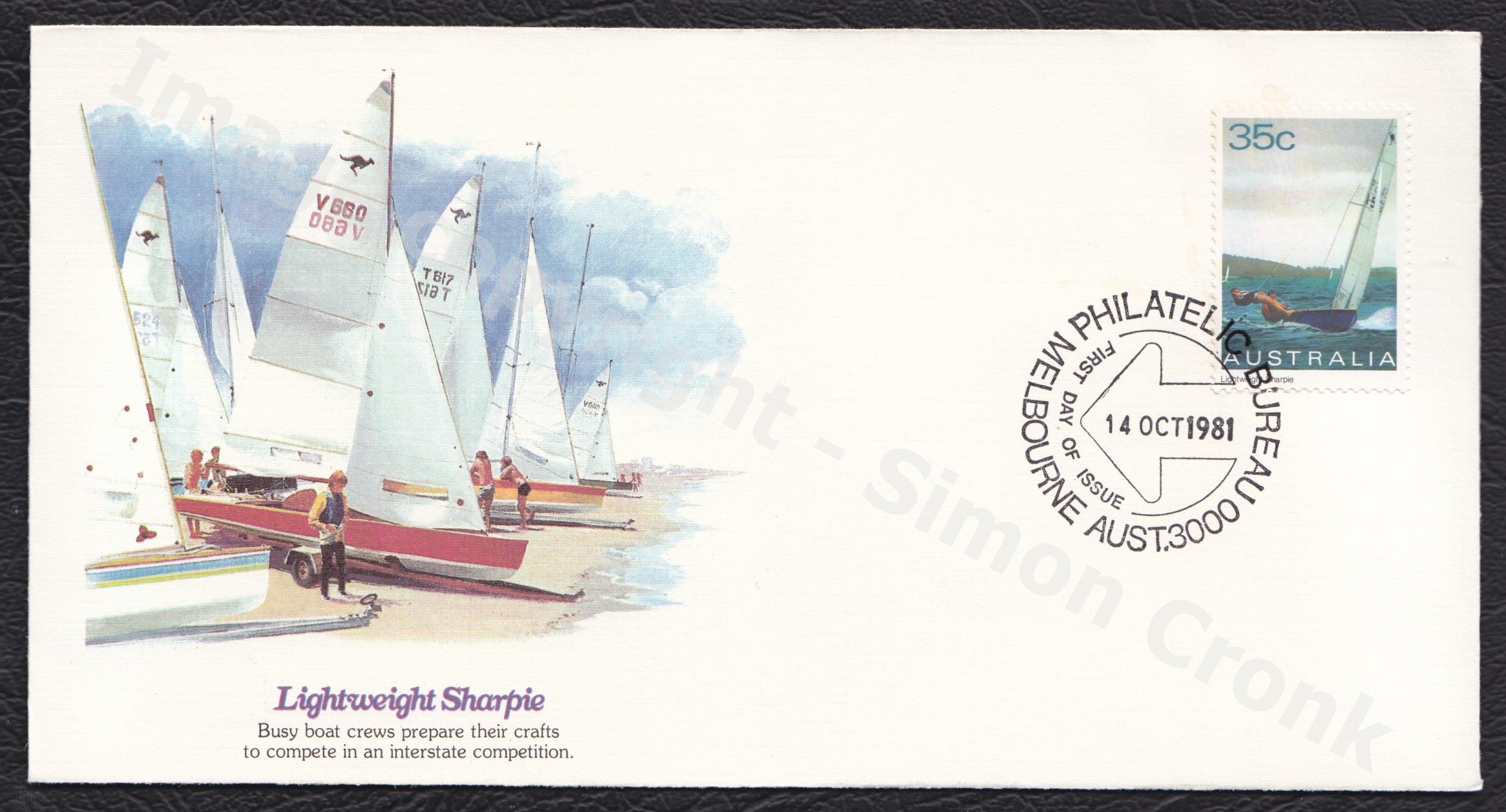 “The response of a well-tuned sailing craft driven by a fresh breeze is much like soaring, skiing or surfing. There is the same surge and swoop, the same silent glide. With a fan of spray lifting upward and the white water wake trailing behind, there is an elation of being in harmony with the elements and harnessing them. The love of sail has a long and colourful history in Australia. In colonial days, sailing ships were Australia’s only link with the homelands of the early settlers. Today, the love of the sea has not abated for the majority of Australians live on the seaboard and yachting has a strong and enthusiastic following. The yacht illustrated on this First Day Cover is the Lightweight Sharpie which is an adaption of the International Twelve Meter Sharpie. It is approximately twenty feet long with a beam of about five feet. The Lightweight Sharpie is manned by a crew of three. It must be kept upright by crew weight alone since it is un-ballasted. To control this yacht requires a high degree of coordination between the helmsman, main hand and the forward hand on the trapeze. Pictured on this First Day Cover are crews rigging their craft in preparation for one of many Australian interstate championships.” 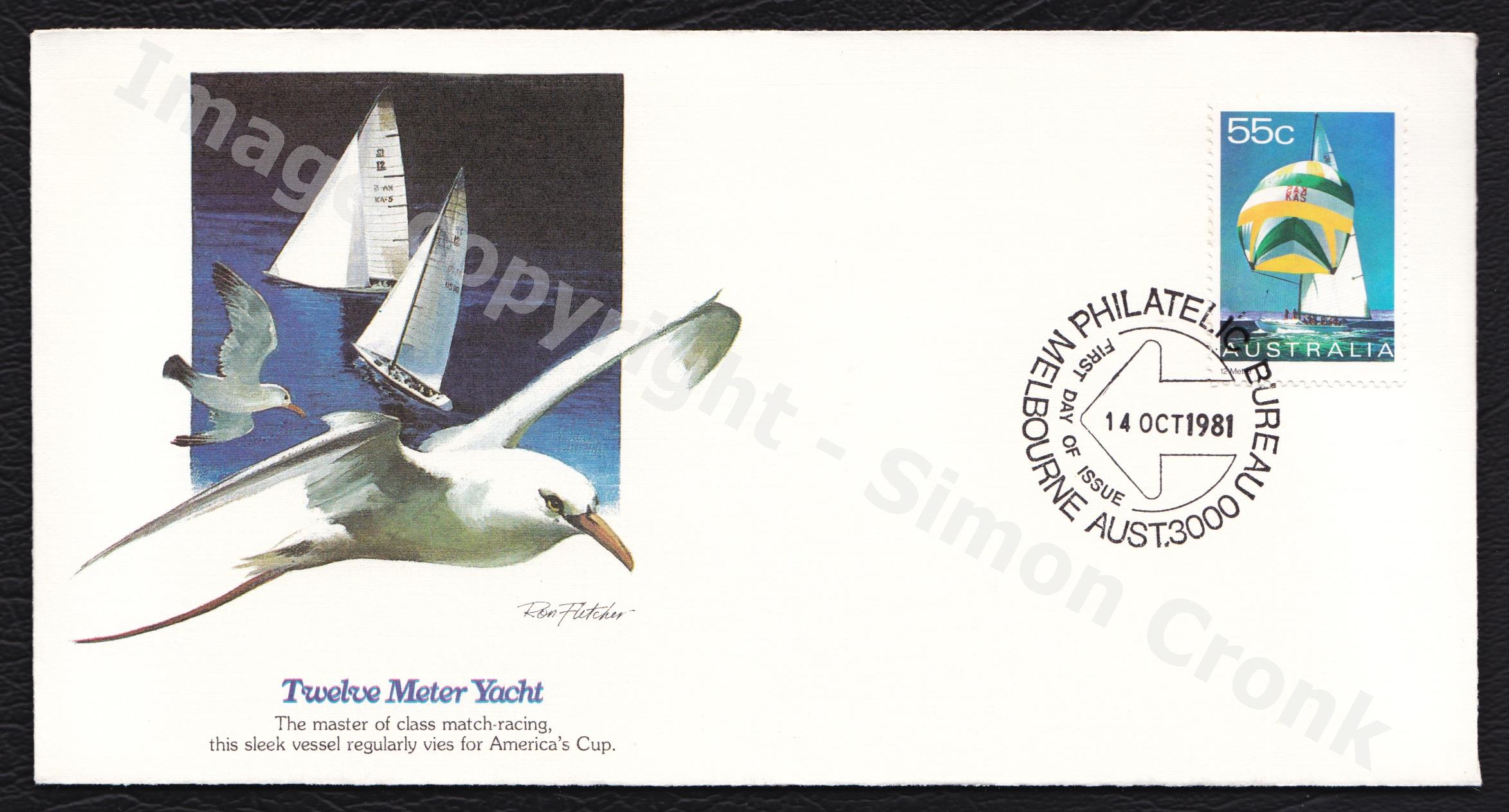 “Beyond its practical purposes in transport, there has always been a sporting quality about sailing. Perhaps the most popular style racing boat is the Twelve Meter class, which is now the largest active racing class. Twelve Meter Yachts are high pedigree yachts especially designed for close match-racing around a triangular course. Racing in this class represents the pinnacle of class match-racing, as no handicaps apply and the first boat over the line wins. Twelve Meter Yachts are approximately twenty yards long and they normally sail with a crew of eleven. Their construction generally embodies a high degree of advanced technology. In fact, much that has been learned from them has been applied to design refinements in other classes of yachts. The America’s Cup is the premier event for which Twelve Meter Yachts compete. The Cup has never been won by any country other than the United States, although in recent years Australia has mounted several challenges in an attempt to wrest the coveted Cup from its holders. The first Australian yacht to win the right to challenge for the America’s Cup was Gretel in 1962. She was followed by Dame Pattie, Gretel II, Southern Cross and Australia, which challenged in 1977 and again in 1980. Today’s competitors must have the same physical skills, knowledge and ability as the navigators of the past. The sea and the winds are the same only the stakes for which they sail have changed.”

“The endless challenge of expanding horizons has always appealed to the sailor no matter how small or large the vessel he commands. A person may begin with a dinghy, driven by a wisp of a sail like those pictured on this First Day Cover. Then one day the dinghy is exchanged for a larger vessel with a bigger sail rigging — which may finally lead to an ocean-racing yawl. At every step, there is a carry-over of skills from the previous stage. But it seems a lifetime is not enough to absorb it all: learn to tie knots, master basic pilotage, and there comes the urge to know celestial navigation, acquire the rudiments of the mariner’s precise vocabulary and discover that its complexities and refinements are endless. But even for a beginner the pleasure and rewards are immediate. The Sabots pictured on this First Day Cover are very small sailing dinghies specifically designed to introduce youngsters to the sport of sailing. They feature one sail on a single mast, with a minimum of lines to tend. Sensitive to every touch of the helm and trim of sheet, they teach the “feel” of the sea as nothing else can. They shoot ahead with the gentlest puff, react immediately to each wind shift, and sometimes turn over if the navigator makes a mistake. Along Australia’s coast, young and old alike first test their skills in small dinghies like the Sabot.” 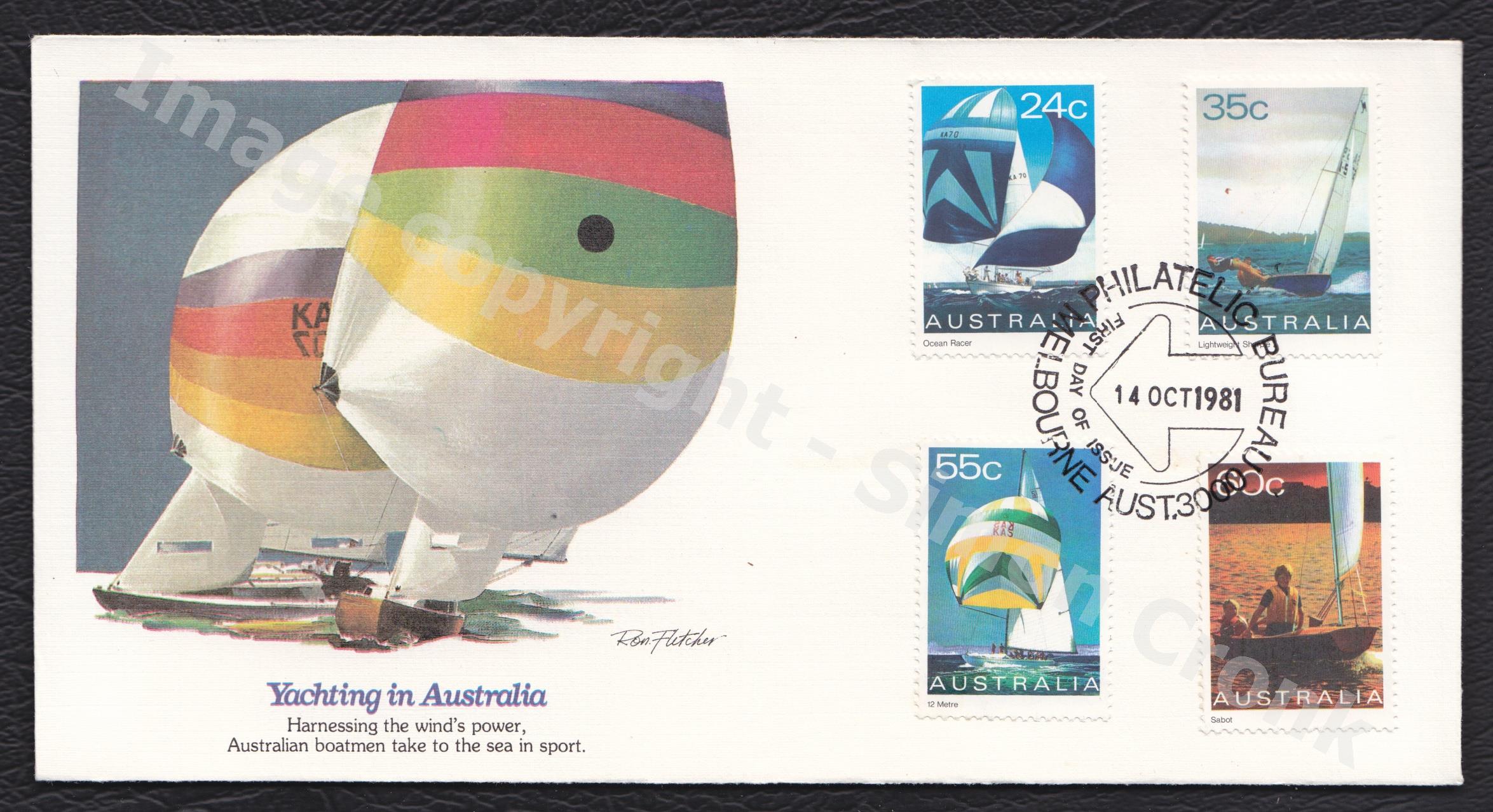 “The love of the sea and sailing has a long history in the Island-continent. They cherished the boat as their lone link to family and friends at home in England. In the years since the country was first settled, boating has changed greatly in Australia, Interest in boating for sport is growing by leaps and bounds in Australia, partly because most Australians live near the sea and use it as a vast, water playground. Indeed, whether he sails a great Ocean Racer or cuts the waves in a small Sabot dinghy, the Australian boatman joins many of his countrymen when he takes to the sea in sport. In honour of the Yachting sport and the skilled yachtsmen of their native land, Australia Post issued the four colourful stamps displayed on this First Day Cover set. The Artist: Ron Fletcher started his art training at a very early age. His formal training culminated when he graduated as an art teacher with the Department of Education. In 1960, Fletcher established his own studio where it grew to be the largest in the Southern Hemisphere. After eighteen years of studio management, Ron Fletcher returned to the drawing board. He is a member of the Stamp Advisory Committee with the Australia Post.”

Some more information about the artist Ron Fletcher from the Unicover website: