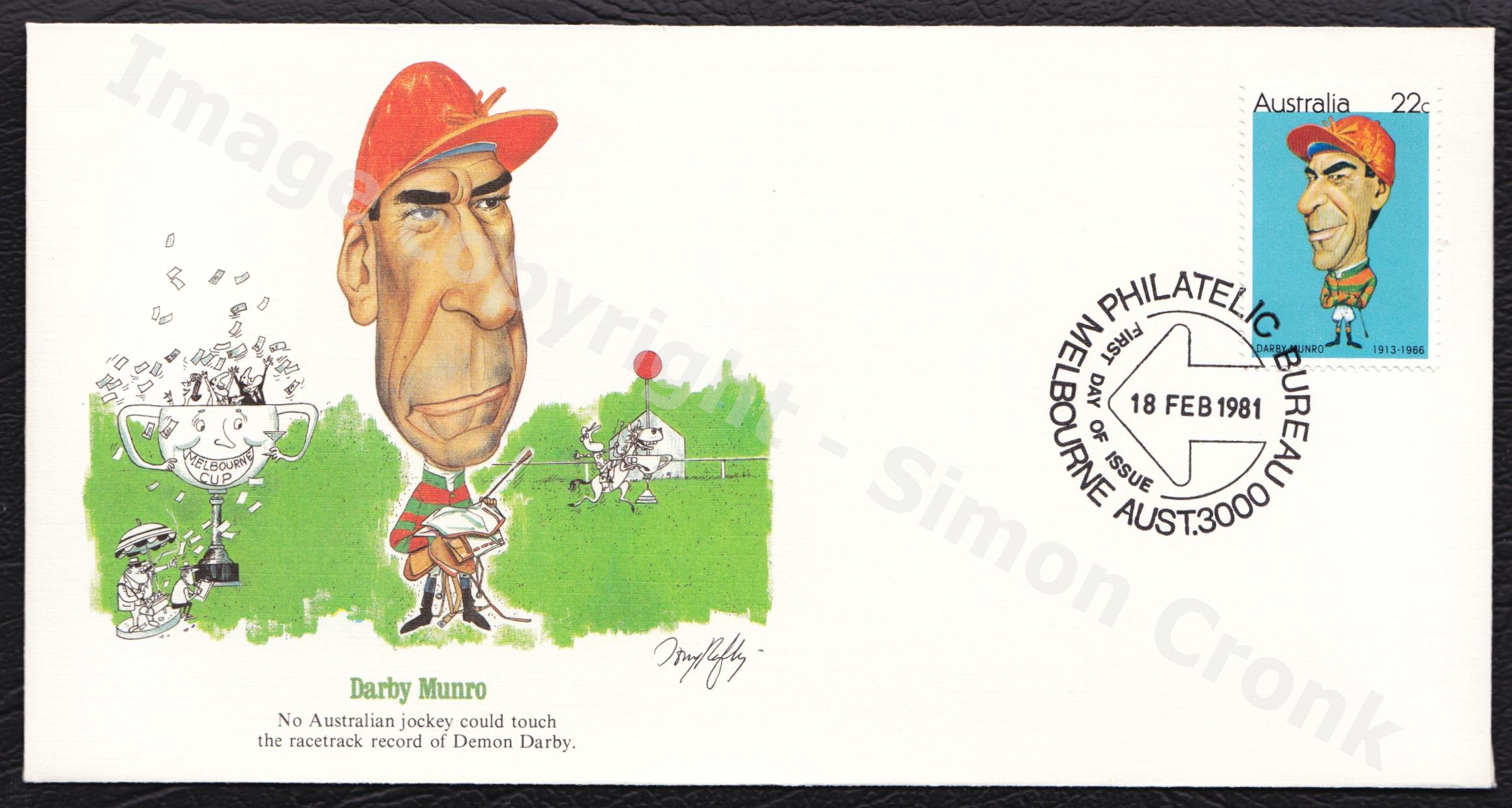 “Darby Munro’s name and the many nicknames the racetrack crowd bestowed on him long ago became household words in cities across Australia. The son of a horse trainer, Darby grew up amid the animals that would make him a legend in his own time. He began riding at ten and four years later entered his first race, finishing out of place. However, it took just two months of practice after that defeat for Darby to become a winner. For his first triumphant race, Darby had to wear lead bags to meet the jockey weight qualifications. But, despite the bags, he beat by a head’s length the horse ridden by his brother Jim. It was the start of an amazing career Munro was just seventeen when he scored successes in the Challenge Stakes and the Doncaster. However, despite his wins, critics denounced his riding style and compared his skill unfavorably to his brother Jim’s. In 1934, his critics were forever silenced with his thrilling triumph at Randwick. Spying a scant opening between two of Australia’s finest riders, Munro surged forward to win by half a head’s length. When just twenty- one, Darby Munro won the prestigious Melbourne Cup proving once and for all that he had no peer among Australia’s jockeys. But, perhaps his finest year came in 1940 when at the Sydney Cup meeting, he set a record by riding nine winning horses. At the end of the 1954-55 racing season, Munro retired. Eleven years later, in 1966, the legendary Australian jockey died, leaving behind a racing legacy that promised him immortality.” 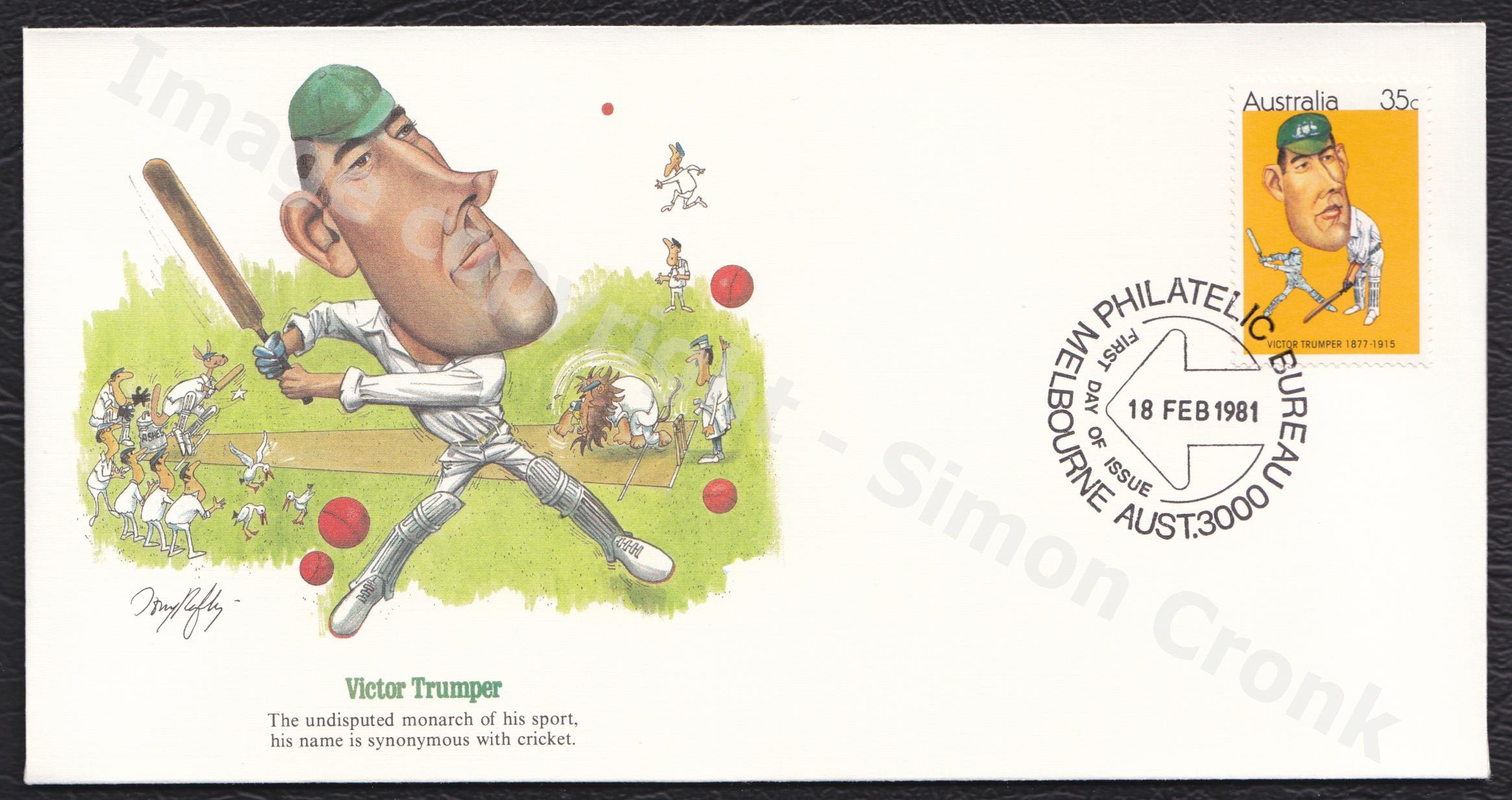 “In the gay nineties, Victor Trumper was the undisputed monarch of the Australian cricket field. He normally averaged one hundred runs an hour, and occasionally exceeded even this rapid rate to the delight of cricket fans everywhere. Victor T rumper’s natural ability was readily apparent by the time he was seventeen. That year, he was chosen to play with the New South Wales Colts team against the visiting A.E. Stoddart team from England. In that game, Trumper hit a sixty-seven, causing English batting star Archie McLaren to comment, “That boy has more natural ability than anyone in the world.” In the 1898-99 season, a prize was offered for the highest aggregate score in Sydney grade cricket. Trumper started badly and on the morning of the last match he needed at least two hundred runs to even stand a chance of winning. Yet, Victor was confident he could win. In an amazing show of skill, Trumper scored 253, raising his aggregate score to 674 well ahead of his nearest rival. In England in 1902, Trumper averaged forty-eight runs for an aggregate score of 2,570. After observing these amazing games, English critics heralded Trumper as the most radiant batsman cricket ever produced. Twelve years later, Trumper played his last cricket game, as failing health forced him off the field forever. On June 28, 19 15, the sports giant died at the age of thirty-seven. One newspaper summed up the sense of loss shared by the sports world, ‘Australian cricket without Trumper is almost unthinkable.'” 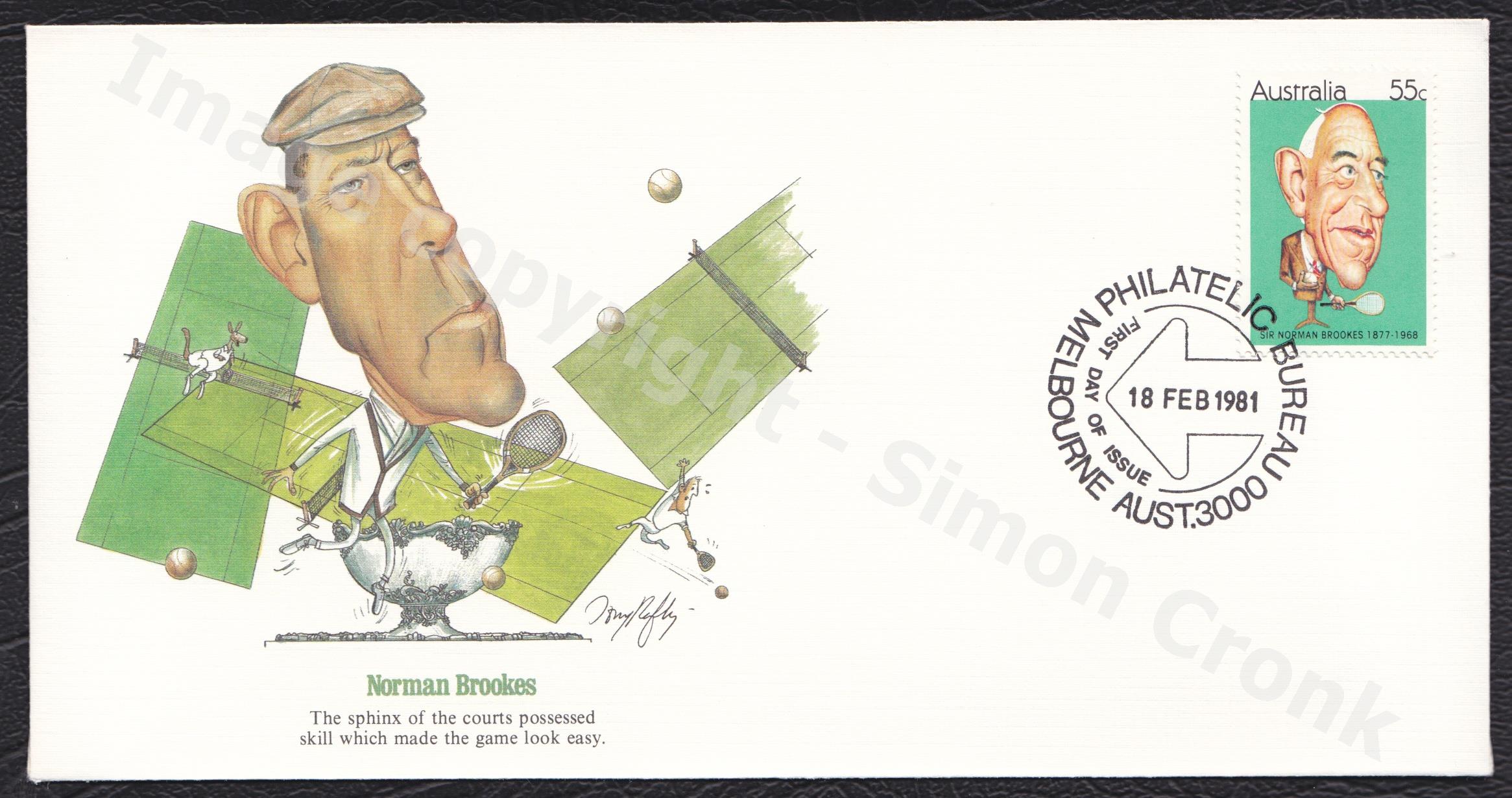 “For thirty years Norman Brookes was the ruling Czar of tennis in Australia. He entered his first tournament at fourteen, embarking on a remarkable career that led him around the world capturing tennis titles wherever he played. In 1905, he won the World Championship Singles and set out for England in quest of the coveted Davis Cup. Though he astounded the English sports world with his fluent left-handed game, he returned to Australia without the trophy. That same year he entered his first Wimbledon tournament, but it was two years later, in 1907, that he won his first Wimbledon title, an achievement he repeated in 1914. Brookes’ unerring accuracy, powerful stroke and quickness had never been equalled on the English court and Brookes was soon classed as the “greatest volleyer” tennis had ever seen. In 1907, he teamed up with Anthony Wilder to wrest the Davis Cup from the English. In his prime, Brookes was known as the Sphinx of the Courts. His volleying was magical, his service was deadly, and he had the high level of skill and confidence that made the game look easy. He represented his country in the Davis Cup Tourney on eight occasions and was singles champion three times. In 1926, Norman Brookes was appointed President of the Lawn Tennis Association of Australia, a position he held until his retirement in 1955. Years later, at the age of eighty-four, Sir Norman Brookes received the Gold Racket Immortal Tennis Award. It was a fitting climax to a sparkling sports career that spanned a lifetime.” 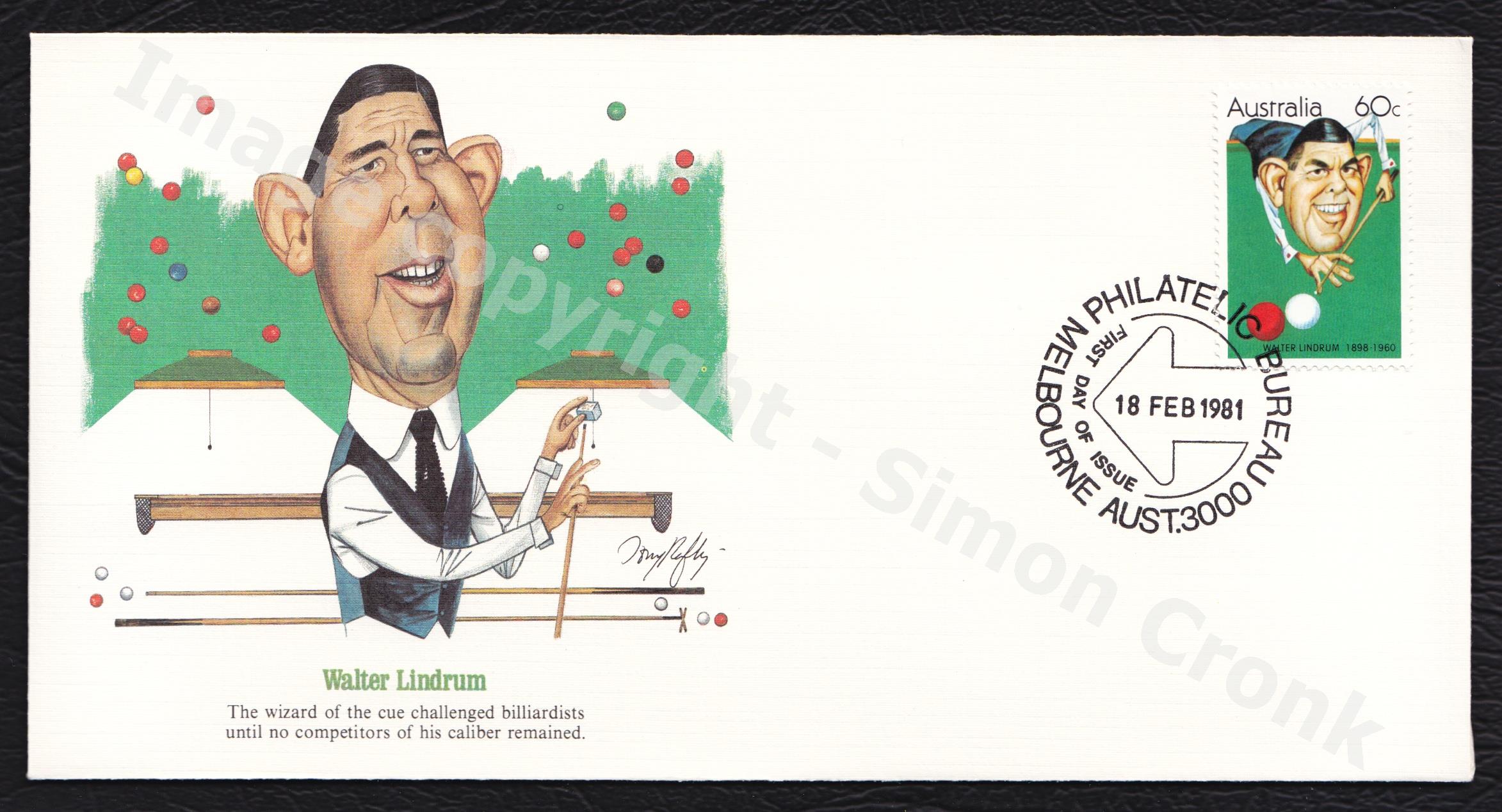 “Like nearly all great billiard players, Walter Lindrum was introduced to the cue at an early age. At four, when his head barely reached above the table, he sat by the corner pocket, listening to his champion father’s billiard tips. The coaching paid off when young Walter won the Junior Australian Championship. At the age of twelve, Walter revealed a glimpse of his great talent when he scored his first hundred. However, it was not until he reached the age of thirty that the measure of Lindrum’s skill was fully known. In that year, before the astonished gaze of billiardist John Wren, the young wizard of the cue made a break of one thousand. Then, in an amazing display of accuracy he went on to break one thousand again. Wren knew he was in the presence of a great talent and offered to back Lindrum wherever and whenever he picked up the cue. In 1929, Lindrum matched cues with Willie Smith, the great English billiardist. The English spectators were aghast when their idol was trounced. Three years later, Lindrum achieved his greatest triumph of all against the world champion Joe Davis. In just under three hours, he created a world record, making a break of 4,137. Lindrum’s phenomenal scoring trend continued until there were finally no billiardists left worthy of competing against him. On July 30, 1960, Walter Lindrum died, ending a distinguished career as a great ambassador of sports for his homeland.” 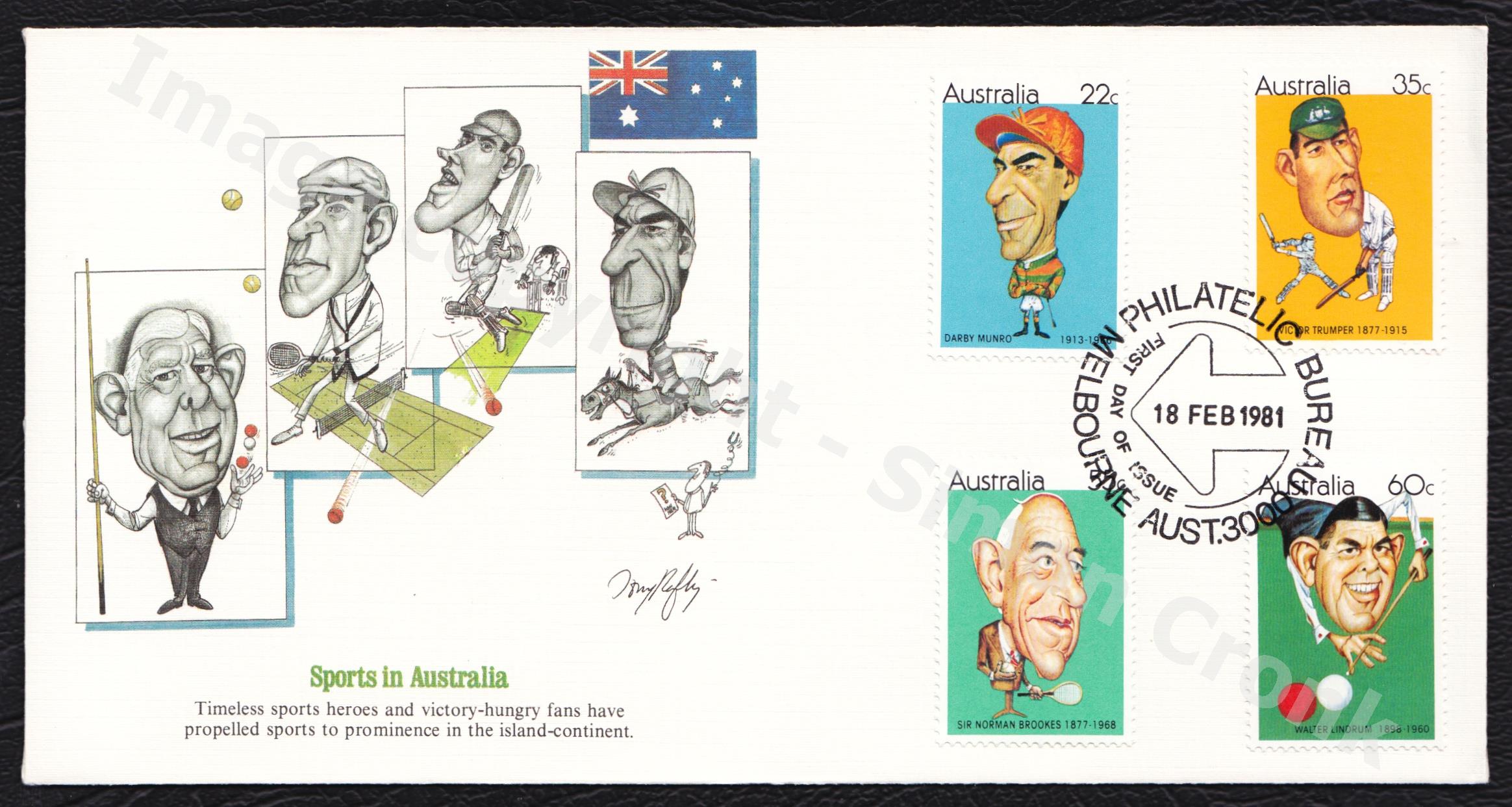 “On any summer day, hundreds of Australians can be seen golfing, playing cricket or tennis in the warm sun. Whatever their favorite game may be, the Australian people love sports and its heroes with nearly a fanatical passion. Today, as a hundred years ago, the sports fans cheer their team on to victory at the Sydney Cricket Ground. Cricket is Australia’s national summer game and it has become popular through such men as Victor Trumper who thrilled sports fans with his matchless batting skill in the gay nineties. Other Australian sports greats have also boosted sports interest in their homeland. No Australian can ever forget the legendary Darby Munro and his peerless jockeying, or the fluent, left-handed game of tennis great Norman Brookes or the unsurpassed talent of Walter Lindrum at the billiard table. These are the timeless heroes of Australian sports, and they are loved just as much as Mickey Mantle, Arnold Palmer, and Sugar Ray Leonard are loved in the United States. In the late 1950’s Australia again began to spawn incredible champions like these great men. Rarely in sports history has there been such a rapid advance on so many sporting fronts. Suddenly, the Australians became champions of tennis, track and field, and swimming. Through the efforts of these recent winners, the heritage of the sports greats honored in this First Day Cover collection, and the victory-hungry enthusiasm of the Australian fans, sports have become great in the island-continent.”

Some more information about the artist Tony Rafty from the Unicover website: