The first day of issue was 29 JUL 1981. There are 4 covers for this series, two singles and two sets (one part of a wider release): 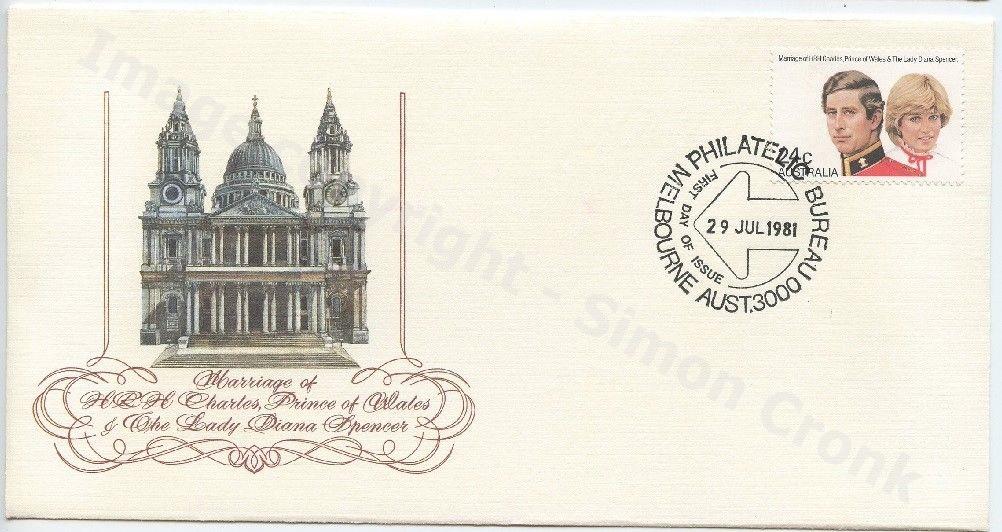 “On July 29, 1981, Charles, Prince of Wales, and heir to the oldest surviving throne in Europe, wed Lady Diana Spencer, descendant of King James I. It was the royal the event of the year… the culmination of months of secret preparations and years of speculation by the press. But, on the historic day, all the guesswork was forever put to rest when Charles and Diana took their wedding vows at St. Paul’s Cathedral, depicted in the painting on this First Day Cover. Over the years, this grand cathedral, parish church of the British Commonwealth, has been very
important to the English people. It is the final resting place of such British heroes as the legendary Lord Nelson and poet John Donne and, in 1897, it was the site of Queen Victoria’s glorious Diamond Jubilee. With the Royal Wedding of Charles and Diana, this grand sanctuary was again host to one of England’s most glittering, regal events. Indeed, the simple, timeless ceremony uniting Britain’s future King and Queen was intensified by the historic halls of St. Paul’s Cathedral. Amid the bright banners of the wedding day, a sense of history pervaded the festivities. As Charles, Prince of Wales, and Lady Diana Spencer knelt at the ancient altar of St. Paul’s Cathedral, they forged a living link with royal traditions as old as England itself.” 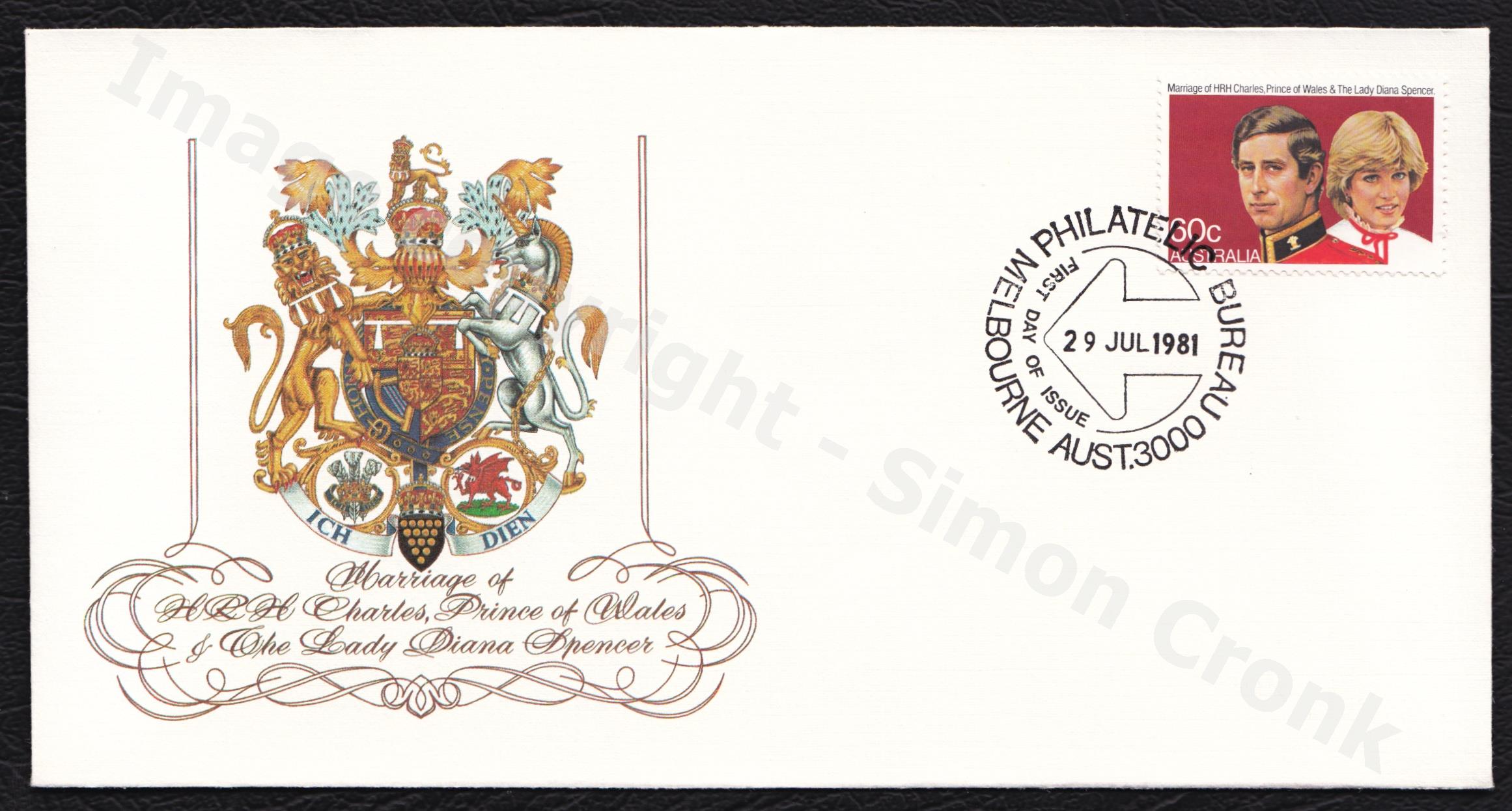 “When Charles was just three years old, his mother succeeded George VI to the British throne. On that day, Prince Charles, as the oldest son of the monarch, became the heir apparent to the Crown. Unlike many aspiring Kings, Prince Charles was given a broad education that took him far from Buckingham Palace. His father, Prince Philip, insisted that the young Prince experience life away from royalty, as it was among the people that one day might be his subjects. In 1958, Queen Elizabeth named Charles the Prince of Wales. He was only nine years old. However, eleven years passed before the Queen presented her son to the Welsh people in a colorful and ancient ceremony held at Wales’ Caernarvon Castle. In the next few years, honors and accomplishments followed rapidly for the young Prince. In 1970, he gained membership in the House of Lords. The next year, he entered the Royal Air Force College and that same year graduated from its advanced flying course. His exposure to his country’s both Air Force and others armed services to his countrymen, and to a diverse education outside the Palace have made Charles an accomplished ambassador for his homeland. As Charles looks ahead to the twenty-first century, he must use all his early life experiences to chart a firm and responsible course for the monarchy. As heir to the world’s only surviving maj or monarchy, Prince Charles faces challenges equal to his demonstrated skills. The painting featured on this First Day Cover illustrates the Coat of Arms of the Prince of Wales.” 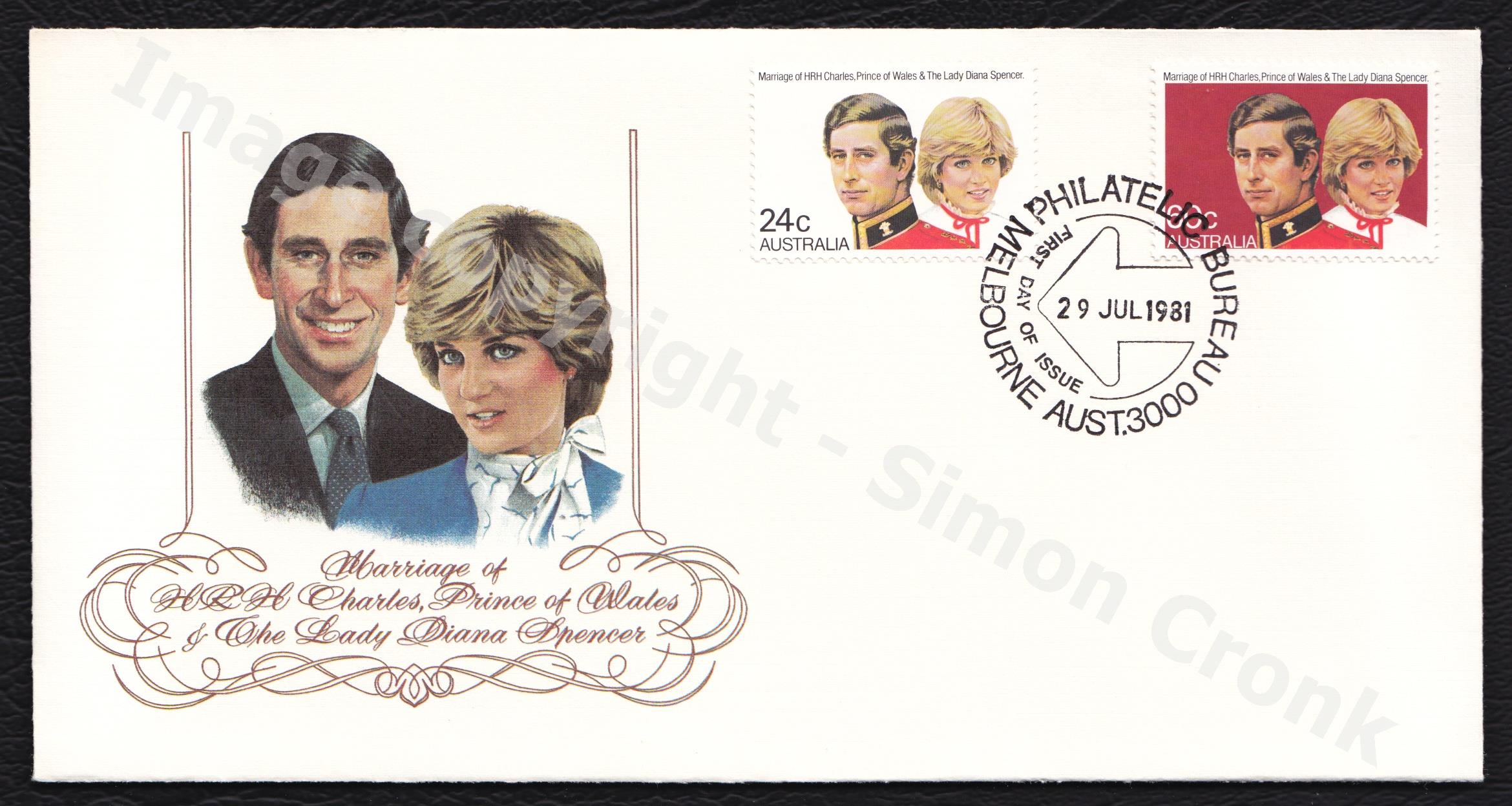 “Following months of speculation by the news media, Prince Charles and Lady Diana Spencer announced their engagement to the world. As befits a future Queen of England, the bride’s family background is as impressive as any in Europe. Her father was the eighth Earl Spencer and her family tree can be traced back to King Charles II and the Stuarts. The British were pleased that Charles has chosen Diana, for she was the first British citizen to marry the heir to the throne in over three hundred years. In fact, not only was Diana British, but she grew up in a house separated from the Royal Gardens by only a wall making her, literally, the girl next door to the heir to the throne. Diana spent her girlhood years romping with her future husband’s younger brothers, Princes Edward and Andrew. However, it was years later, after she had left school, that Diana was first seen in the company of Prince Charles. In 1981, the marriage of Prince Charles and Lady Diana Spencer was acclaimed the Wedding of the Century. Attended by dignitaries and heads of state from all around the world, it was indeed a glittering panorama of splendor and pageantry. But, apart from the elegance of this grand celebration itself, the Royal Wedding will be remembered both for the enormous popularity of the Royal Couple and for the special historic significance of it was the first wedding of a IPrince of Wales the event in over one hundred years.” 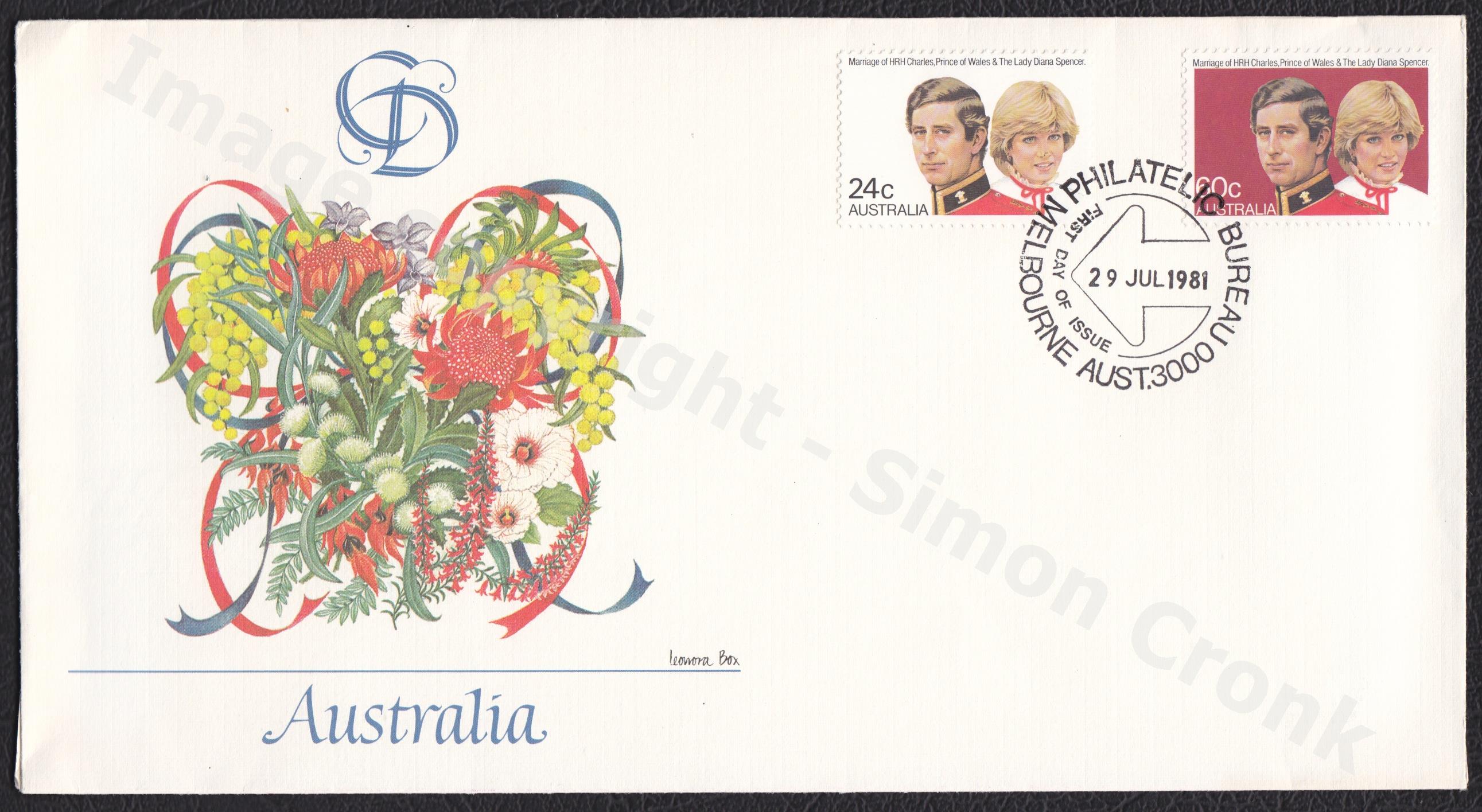 Some more information about the artist Brian Clinton from the Unicover website:

Some more information about the artist Leonora Box from the Unicover website (she designed the Type II cover cachet design):