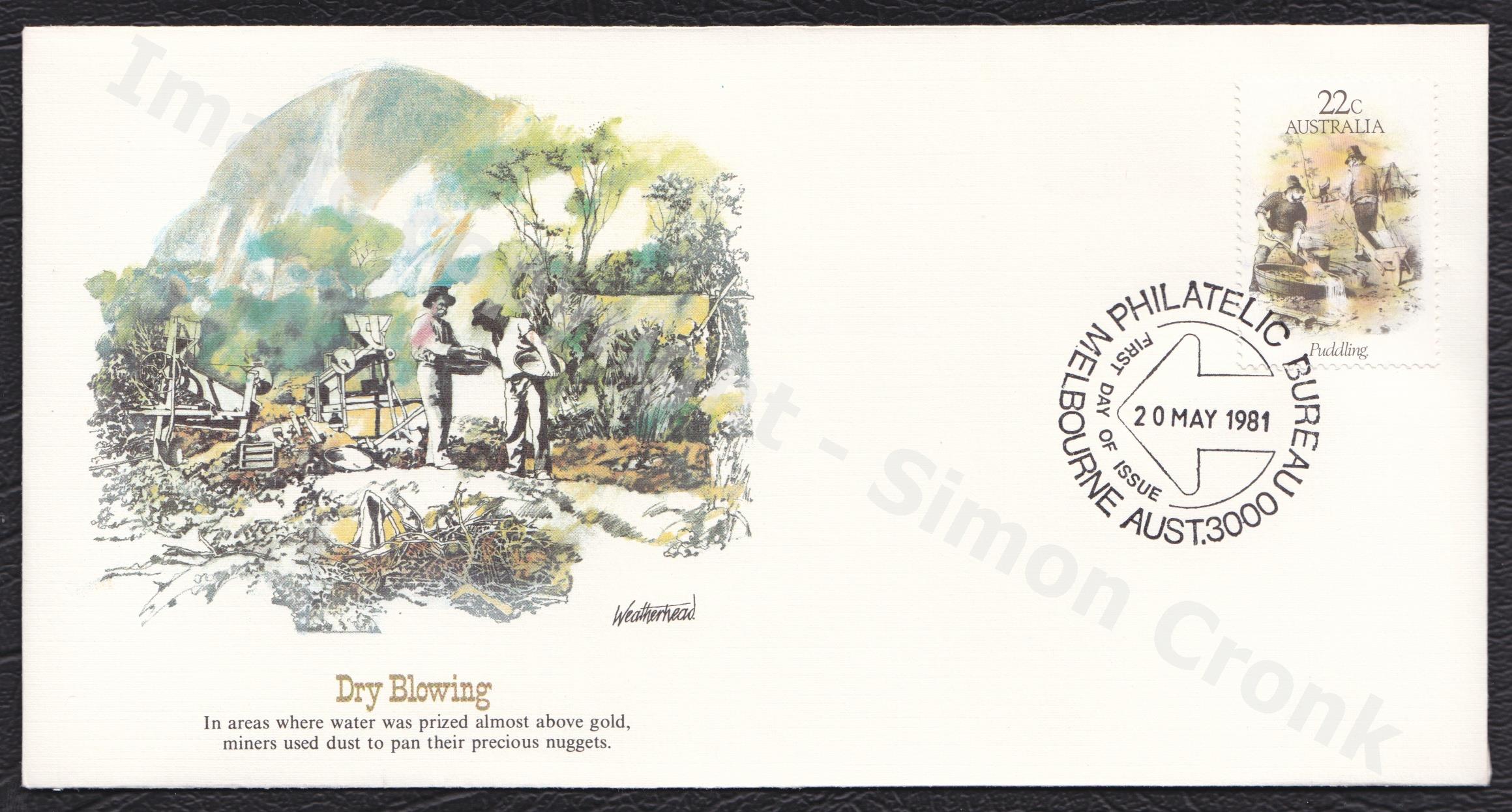 “If the miners were fortunate, there was water available to help them sift gold from the rocky rubble. If not, they had to make do as best they could with whatever means they could devise. In areas where a prolonged dry season dried up the creeks, dry stacking was frequently used. For this innovative method, the dirt to be washed for gold was stacked beneath a race, or artificial channel specially constructed to collect storm water. As the water rushed through the dirt, the gold would be exposed. In other areas, like Western Australia, where water was prized almost above gold, miners used dry blowing to extract the gold from the dirt. This method made a draught of air do the work that water does in panning, and it worked much as winnowing — or throwing grain into the air blows away chaff. Later, manufacturers invented several mechanical dry blowers, but in the early days the difficult and tedious hand dry blowing was the common practice. Often biting, pesky flies were as plentiful as water was scarce and clouds of dust would spring out of nowhere to torment the prospectors. Many times there was not a breath of breeze and even less gold. Conditions like these made the men wonder if gold was not bought at too dear a price. Yet, no depth of despair could compare to the exhilaration the men shared after a successful day of dry blowing. These successes, no matter how few and far between, fanned the fires of desire to continue prospect- inge Gold fever was a difficult disease to cure, even when conditions were deplorable.” 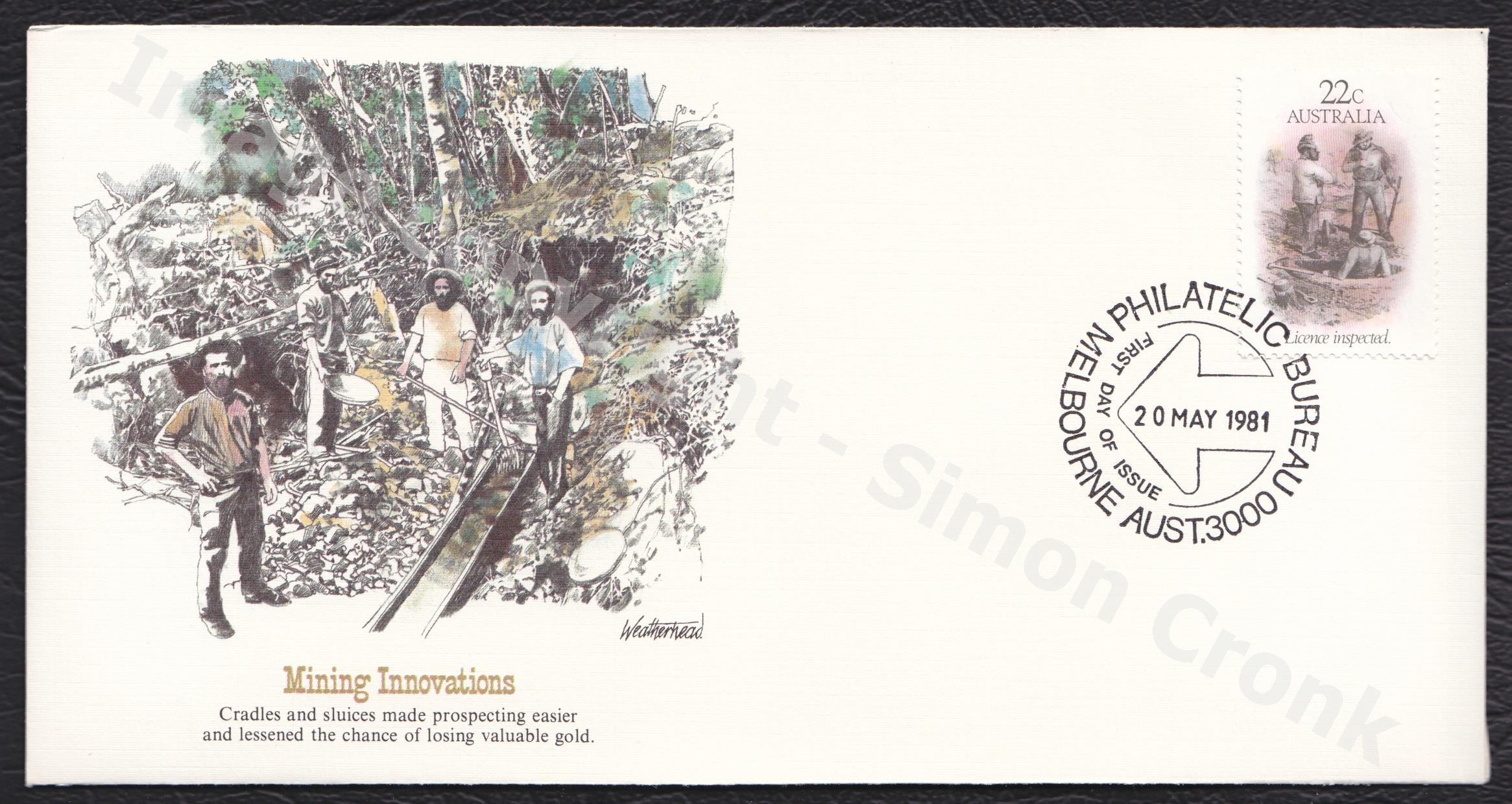 “Not only were living conditions difficult for the prospectors, but the work itself required extreme patience. All too often, careless panning led to lost gold. There are many stories of men finding great quantities of the precious metal in wash-dirt carelessly searched by another miner. Because the work went so slowly, the miners soon devised more sophisticated means of separating the gold from the soil. Hand-rocked cradles, much like those used for babies, reduced the chance of losing gold. Sluices, or manmade channels with a valve to regulate the water flow, harnessed water power and made the job of prospecting easier. Before long, the Australian prospectors became famous for their inventiveness and their ability to make do with the materials they could find close at hand. These traits were born of necessity, for in the early days of Australian mining the men had to provide almost everything for themselves. They chopped wood, washed their clothes, cooked their own meals all in addition to the fulltime work of prospecting. Yet, even though the life was rough and tiring almost to the point of being unendurable, the prospectors would not trade it for the swure life they had left behind in the city. Theirs was a a daily battle against the calling to high adventure worst living conditions nature could throw their way. But, for the thrill of seeing gold sparkle in their pans, the men happily endured it all. As tales of fortunes in gold drifted back to Australia’s coastal cities, the parade of men to the gold fields grew ever larger.” 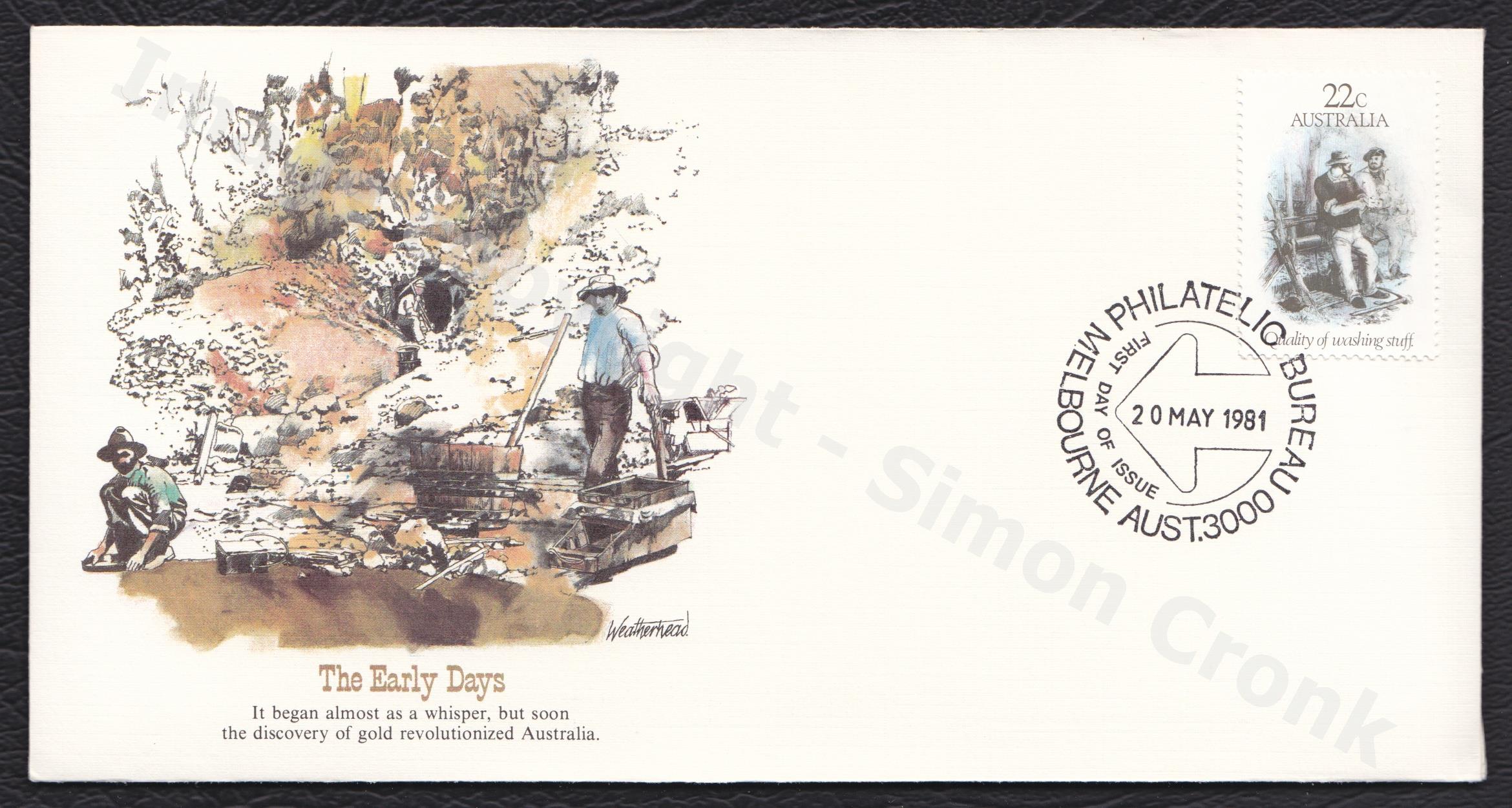 “Although it began almost as a whisper among a few dreamy-eyed miners, the discovery of gold revolutionized Australia in a matter of months. In 1851, E. H. Hargraves, a veteran prospector from the California Gold Rush, discovered Australia’s first important gold field in New South Wales. Later that same year, the precious metal was also found in Victoria. The Australian Gold Rush was borne People from all over the world flocked to the Island Continent, their dreams of striking it rich gleaming in their eyes — almost as visibly as if they wore them as a red badge on their shirts. It was a time of great hope and great expectation. In a ten-year period, the great horde of hopeful miners boosted the country’s population of 400,000 to over 1,100,000. Towns were overcrowded. Farming and other everyday work stopped as gold fever caught hold, drawing people from their usual occupations to the rugged life of prospecting in the rich gold fields. The October 1851 Melbourne Argus gave one vivid afflicting gold fever account of the “new disease” Australians, “If the symptoms are unchecked by a rise in his salary, all objects he views appear of a golden hue excitement terminates in delirium — one morn we miss and the answer to all the anxious inquiries of his him e friends is that he was last seen on a loaded bullock dray shovel and a cradle.” The Gold Rush provided with a changed not only the individual lives of those who succumbed to gold fever, it also brought Australia itself into one of the most exciting eras in her history.”

“The look of the Australian countryside was changed forever by the gold fields. The change was not so much from the actual mining operations as from the earthworks built to move water to where it was needed most. Channels bringing water from holding dams to great water wheels snaked their way across the land. The magnitude of these water projects is especially astounding when one considers that it was all the product of pick, shovel, and hard work. In north and west Australia, where lack of water was a constant problem, water power was not available for mining and scarcely for the miners’ basic needs of washing and drinking. To provide water in Western Australia, salt water was freshened by a complicated process and sold at a premium price. Still, it was cheaper than water carried for miles by muletrain. With their pans and elaborate waterworks, the early miners greatly exhausted the supply of alluvial gold. When this happened, the individual miner’s importante gradually waned and the day of the mining company arrived. Men discovered that the alluvial gold was just the tip of the iceberg and the real riches lay buried deep beneath the ground. The look of the gold fields was changing. The shallow holes and heaps of panned soil were giving way to huge construction. Soon, a successful miner’s shouts of joy at panning a single gold nugget were replaced by the constant whir of machinery. The romance of the Australian Gold Rush was becoming the age of a booming new mining industry.” 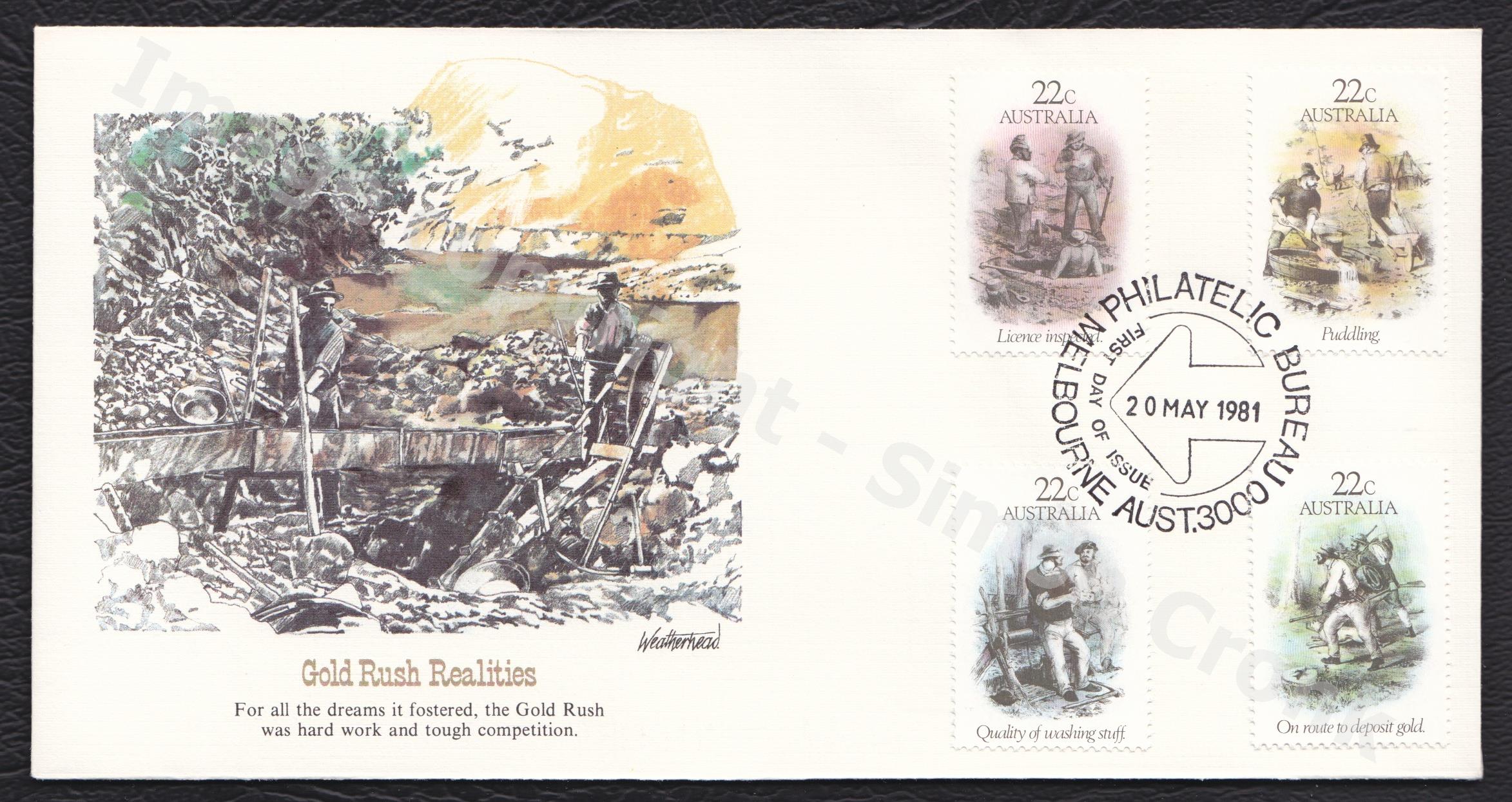 “When a digger arrived in the Australian gold fields for the first time, the sight that greeted him was awesome. To an old mining hand, the swarms ofminers earnestly engaged in various activities could be identified as rockers, sluicers, or panners. However, to the newcomer, it was all quite ominous. His romantic dreams, so carefully nurtured back home, were fast becoming a reality of conditions and hard work. On arrival, the new miner’s first task was to obtain a license at a cost of thirty shillings per month, or about the equivalent of half an ounce of gold. On the back of the license were written the conditions by which he must abide. First and foremost, he must carry his license at all times. Fines ranging up to nearly a year’s wages were levied for failure to comply. Many men refused to buy the expensive licenses, opting instead to risk being caught by the gold field police. Once his license was secured, the prospector’s next step was to stake his claim. If he envisioned his claim to be situated on a lonely mountain rich in gold, his only problem being to get enough wagons to carry his metal to town, he was to be sorely disappointed. In most cases, the size of a stake was about eight to twelve square feet per man or about a shovel’s length from where he stood. Often, stakes were set back to back, with men working frantically to find gold before their neighbors. For all the dreams and visions of grandeur it fostered, the reality of the Gold Rush was hard work, regulations, and tough competition between miners.”