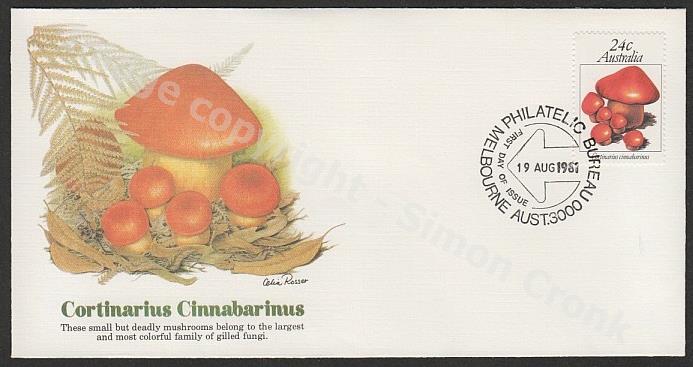 “Nestled in the vegetation of the forest floor, the almost limitless forms and colors of fungi have long piqued man’s curiosity. Although the welfare of man is tied to the lives of fungi in many surprising ways, fungi do not make up an important part of man’s diet. While millions of edible mushrooms are cultivated annually, they are considered luxuries, not staples essential for survival. In fact, man would probably starve to death if he could eat only fungi since their nutritional value is low and edible varieties are greatly outnumbered by toxic species. Pictured on this First Day Cover is a Cortinarius Cinnabarinus one of the many toxic mushrooms. These small, red mushrooms are found in the shady areas of drier, open forests of Australia and belong to the largest and most colorful family of gilled fungi. The word ‘cortinarius’ refers to the delicate veil connecting the edge of the caps to the stems of young mushrooms. This web-like veil protects young spore-bearing gills which break away from the cap as they expand. Found in the soil among the grass roots of a meadow or in the mat of dead leaves, the mushroom is truly one of nature’s most amazing creations. Day after day, it produces millions of spores to be carried by the wind and gentle air currents, beginning its unique life cycle anew.” 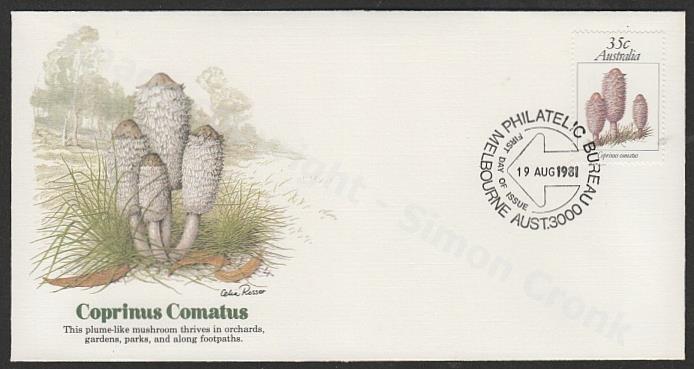 “Man’s love of nature usually doesn’t include the appreciation of a green mold which destroys an orange. However, the natural shapes of common fungi display a delicate artistry which challenges the triumphs of the human imagination and hold many delights for the curious eye. While most individuals readily associate the term fungi with mold, it should be remembered there are also many beautiful varieties of fungi. Perhaps the most unique and delightful varieties are those which grow prolifically in Australian forests. For example, the beautiful Coprinus Comatus, commonly called Shaggy Mane, is found growing in clusters during Summer and Autumn. At that time of year, the warm earth, coupled with usually heavy rainfall, creates ideal conditions for growth. This plume-like fungus lives off dead plant and animal remains and, in conjunction with bacteria, insects and worms, helps to break down these substances and speed their decay. Shaggy Mane thrives in orchards, gardens, parks and along footpaths . . . wherever soil is well fertilized, and flourishes on deposits of limy material. Although it grows quickly, it is short-lived and autodigesting. At maturity, the caps turn black and liquefy, falling away in inky drops leaving unusual formations of white stalks. Coprinus Comatus may be eaten and is considered a delicacy, although they must be harvested while the caps are young.” 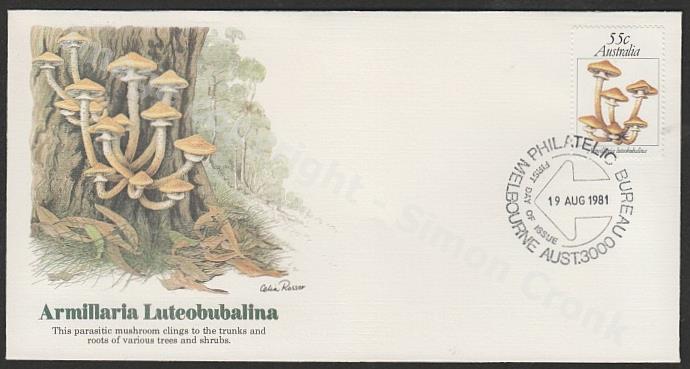 “Although considered a “low” form of life, fungi reveal the incredible range of nature’s creativity in their small corner of the living world. Delicate plants pop into sight from the moist, warm forest floor and push their way through nourishing layers of decaying forest to take their place in the magnificent display of nature’s handiwork. They are a classic example of nature’s cycle of self-sufficiency. While many forms of fungus aid in the decomposition of organic matter and serve as nourishment for man, others contain no nutritional value and are harmful to plants. Some species of fungi are parasitic and attack other plants by living on their tissues, causing deformities and disease. The Honey Mushroom, featured on this First Day Cover, is a unique, candelabra shaped fungus that varies in number from small groups to large colonies numbering in the hundreds. These tenacious parasites cling to the trunks and roots of various trees, including mulberry, oak, willow, poplar, orange, fir and many others indigenous to the forest belts of eastern, western and southern Australia. As the mushroom grows, it produces hard, dark, cord-like structures beneath the ground, called rhizomorphse These root-like cords search out and infect the roots of adjacent trees and shrubs and eventually destroy them. As nature provides intriguing beauty in its smallest creations, it also provides them with an innate ability to survive.” 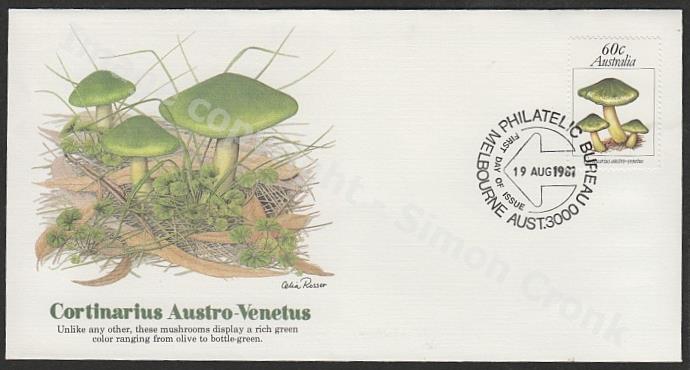 “There seem to be few places on earth where some kind of fungus cannot find enough nourishment to flourish. Green plants, fruits and vegetables of all kinds, old wood and soil are natural habitats for fungus growth. In contrast, some forms of fungi thrive on old feathers, leather, bones, paper and cloth while a few molds grow relatively well in diluted solutions of chemical salts. Years ago, these fungi would show up on the druggist’s shelves in seldom-used bottles of solutions for making prescrip-tions. Throughout the world there are over 100,000 different species of fungi — each unique in its form and function. The Cortinarius Austro-Venetus mushrooms, featured on this First Day Cover, display a rare green color which ranges from olive to bottle-green. Unlike most other mushrooms, this species is found in the damp, not the Australian forests during cool winter months . . . warm, humid summer. In addition to green, the Cortinarius Austro-Venetus ranges in color from pure white, cream, yellow, orange, brown to lilac and even deep purple. These intriguing living organisms are quite beautiful because of their elegant shapes, rich coloring and the incredible precision of their structure. Their breathtaking beauty and vivid colors are a delightful introduction to the small, unnoticed natural wonders beauties equally rewarding to the mind around us and to the eye.” 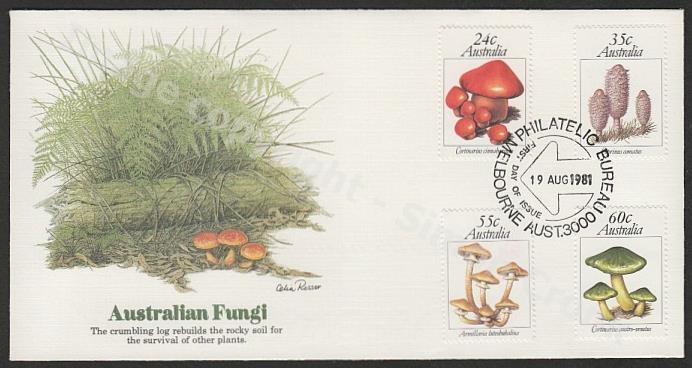 “Mushrooms, morels, truffles, molds . . . the name “Fungus” applies to each of these intriguing organisms. Mankind has long attached great importance to these fungi. To the ancients, mushrooms were symbolic of the supernatural, and primitive man long ago discovered that certain kinds, when eaten, can produce fantastic dreams. Ancient Romans considered mushrooms a delicacy and, for the past two thousand years, they have continued to be enjoyed almost universally as a popular food. The four fungi selected for this stamp series are known as agarics, or gilled fungi. Each can be found in the rain forest belts of eastern, southern, and western Australia. The most favorable time of growth is autumn and winter months after heavy rain, when the required combination of warmth and moisture are present. In the deep, cool forest, great trees struggle to maintain a foothold in rocky soil. Some inevitably must die, and their dead wood provides essential nourishment for the fungi. They digest the woody material, reducing it to fragments- thus the crumbling log rebuilds the rocky soil for the survival of countless other plants. In addition, fungi themselves generate carbon dioxide gas, which is passed into the air and absorbed by green plants for making new food, the process on which life on this planet is based. Thus, the fungi fill an important niche in nature’s delicate ecological balance.”

Some more information about the artist Celia Rosser from the Unicover website: