Firstly, there are two Fleetwood “Flora & Fauna” covers for the Animals Series 1 set: one for the 5c Hairy-nosed Wombat and one for the 30c Bridled Nail-tailed Wallaby. 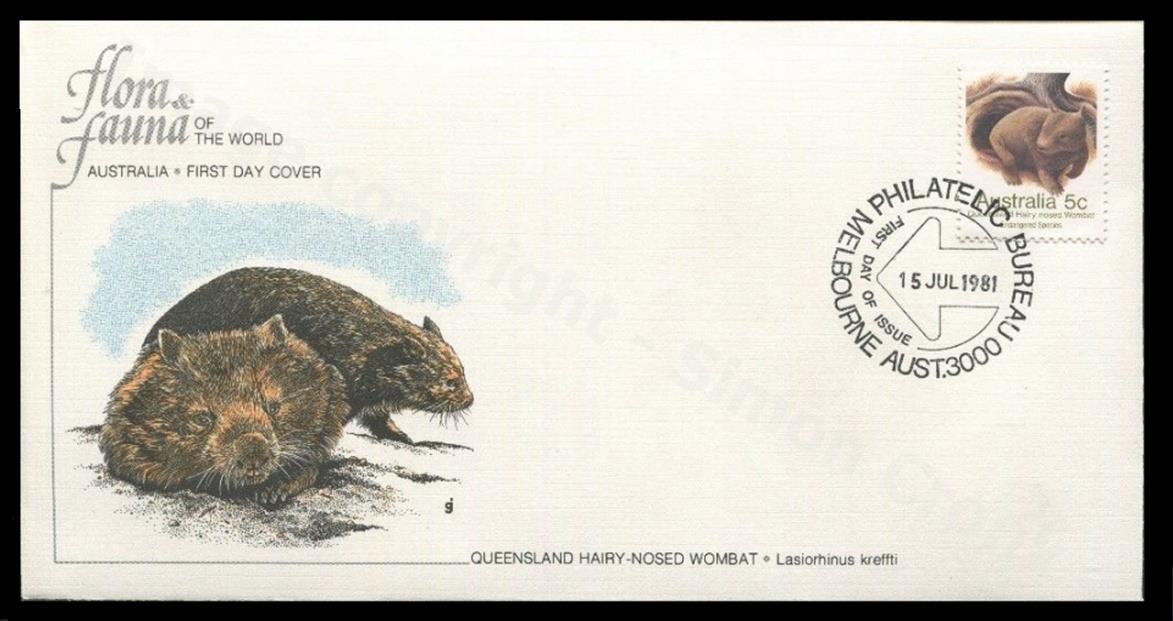 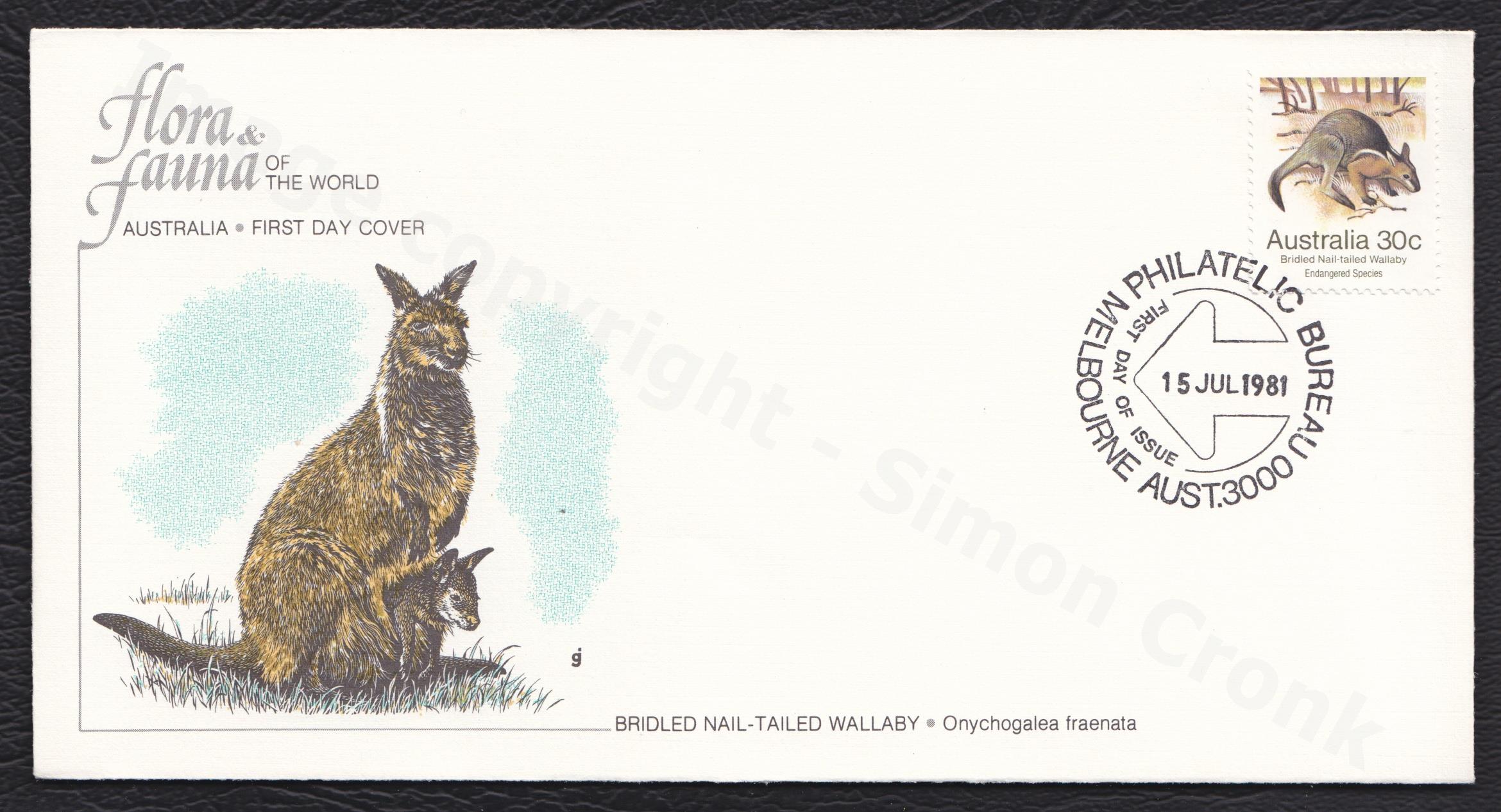 There are 7 covers which were released on 15th July 1981 for the same Animals Series 1 set. There is one cover for each single stamp, and a cover for the whole set. 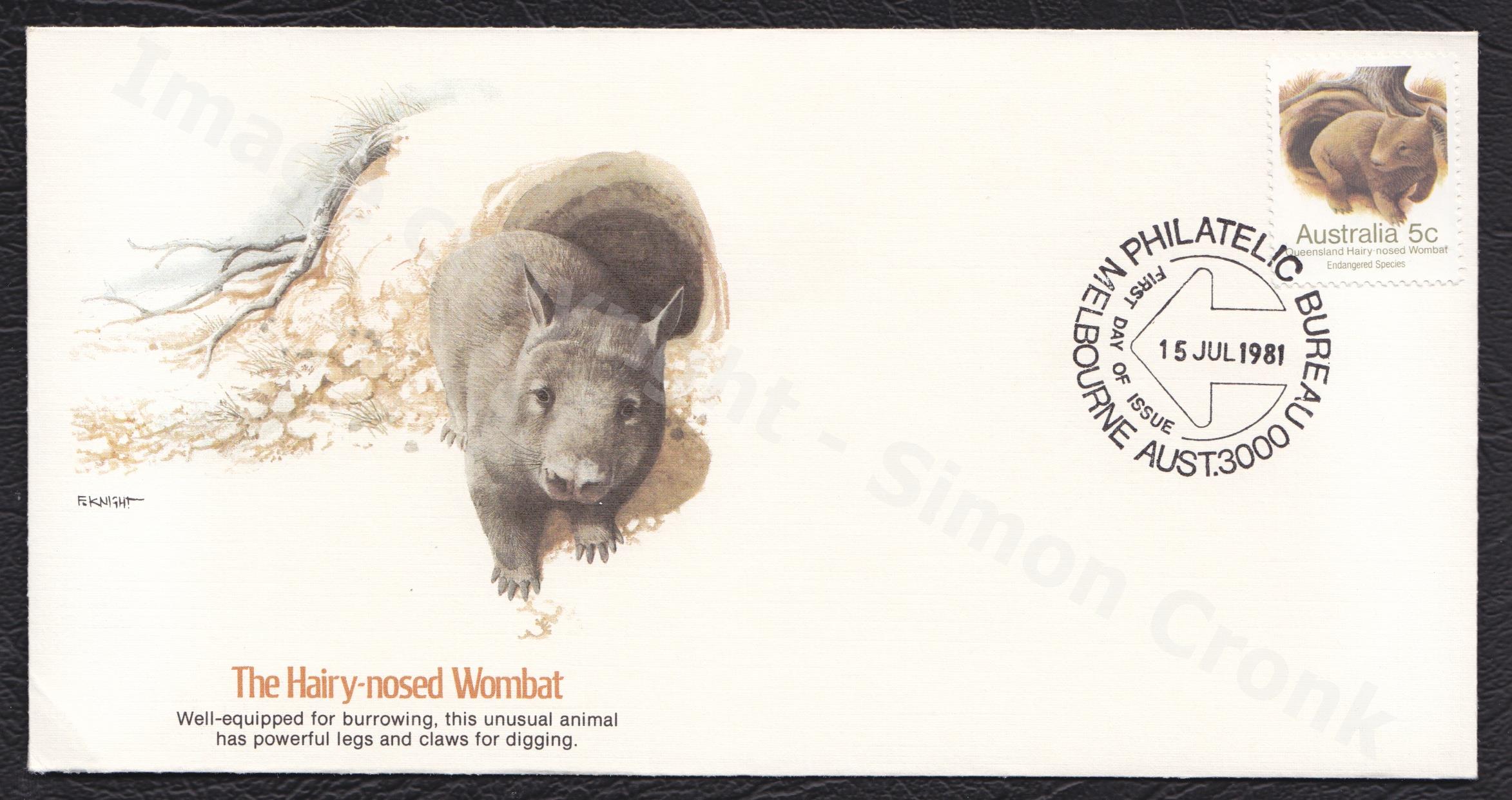 “The Hairy-nosed Wombat is a strong, heavy animal. Since it is a burrowing animal, it has powerful legs and strong claws well adapted for digging. The soft, silky hair is brown. The head is very broad and it has relatively long, slightly pointed ears which have tufts of white hairs around the margins. The muzzle is covered with short, close brown hairs, hence the name — Hairy-nosed Wombat. This species is rare and has only been recorded in three restricted localities. Destruction of habitat for pastoral development and competition for forage with sheep and cattle have severely reduced the range of the Hairy-nosed Wombat. The only known colony of this species is at Epping Forest near Clermont in Queensland, Australia. The vegetation of the area is low open mixed woodland of Eucalypt, Acacia and other tree species with a sparse ground cover of low native grasses. Wombats’ burrows are in groups among clumps of trees at the edge of a shallow gully. About one hundred burrow entrances showing signs of Wombat activity were recently recorded. However, the number of Wombats in the colony is unknown since an animal may use more than one burrow. Wombats remain underground during the day where the air is humid. They conserve their water and are able to survive in the dry hot environment of central Queensland.” 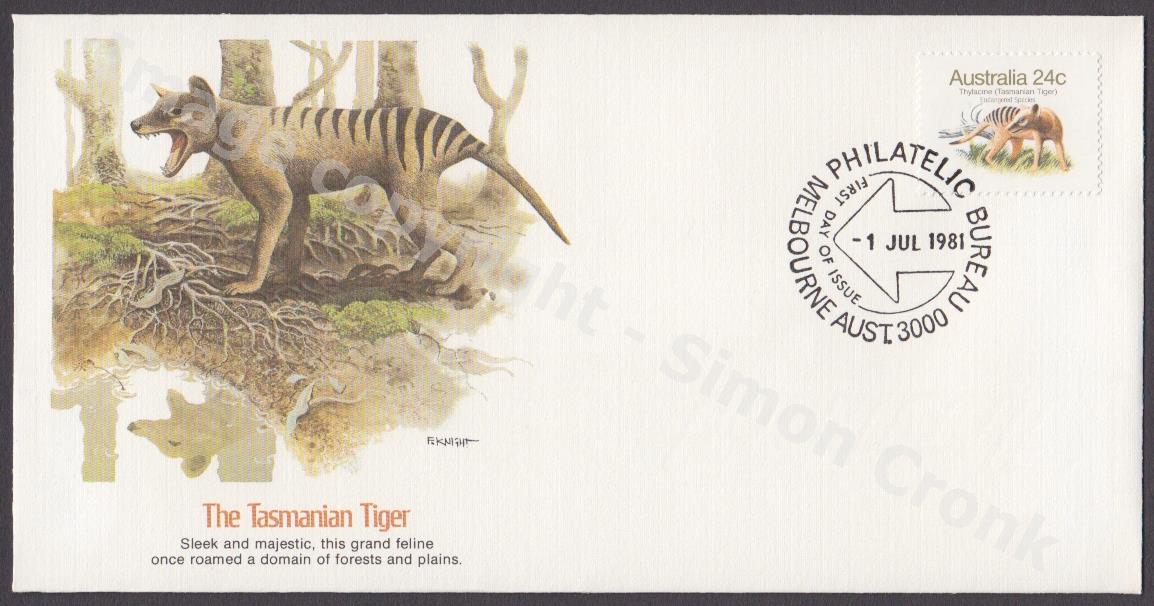 “The Tasmanian Tiger, also called the Tasmanian Wolf or the Thylacine, once roamed throughout the northeastern half of Tasmania stalking a domain of open forests, woodlands and grassy plains. They are nocturnal animals and are basically solitary though they have been reported hunting in pairs or occasionally in small family groups. They are carnivorous and hunt kangaroos, wallabies, small mammals and birds which they kill by crushing the skull with their powerful jaws. Often only the blood, liver and the kidney fat are eaten. Like all marsupials, the female Tiger carries its young in a pouch. The pouch opens backwards enabling the animal to run through the bush without injuring the offspring inside. Tasmanian Tigers are one of the rarest and most elusive animals in Australia. They were common in Tasmania at the beginning of European settlement but were regarded as sheep and poultry killers by the settlers. A bounty system was introduced and they were destroyed in great numbers. The population was reduced so drastically that it failed to recover. There have been numerous sightings reported in the last forty years and there may still be remnant populations existing in remote areas. The Tasmanian National Parks and Wildlife Service investigates each reported sighting but none have been verified. In 1938 the Tasmanian Government placed the Tiger on the list of wholly protected species.” 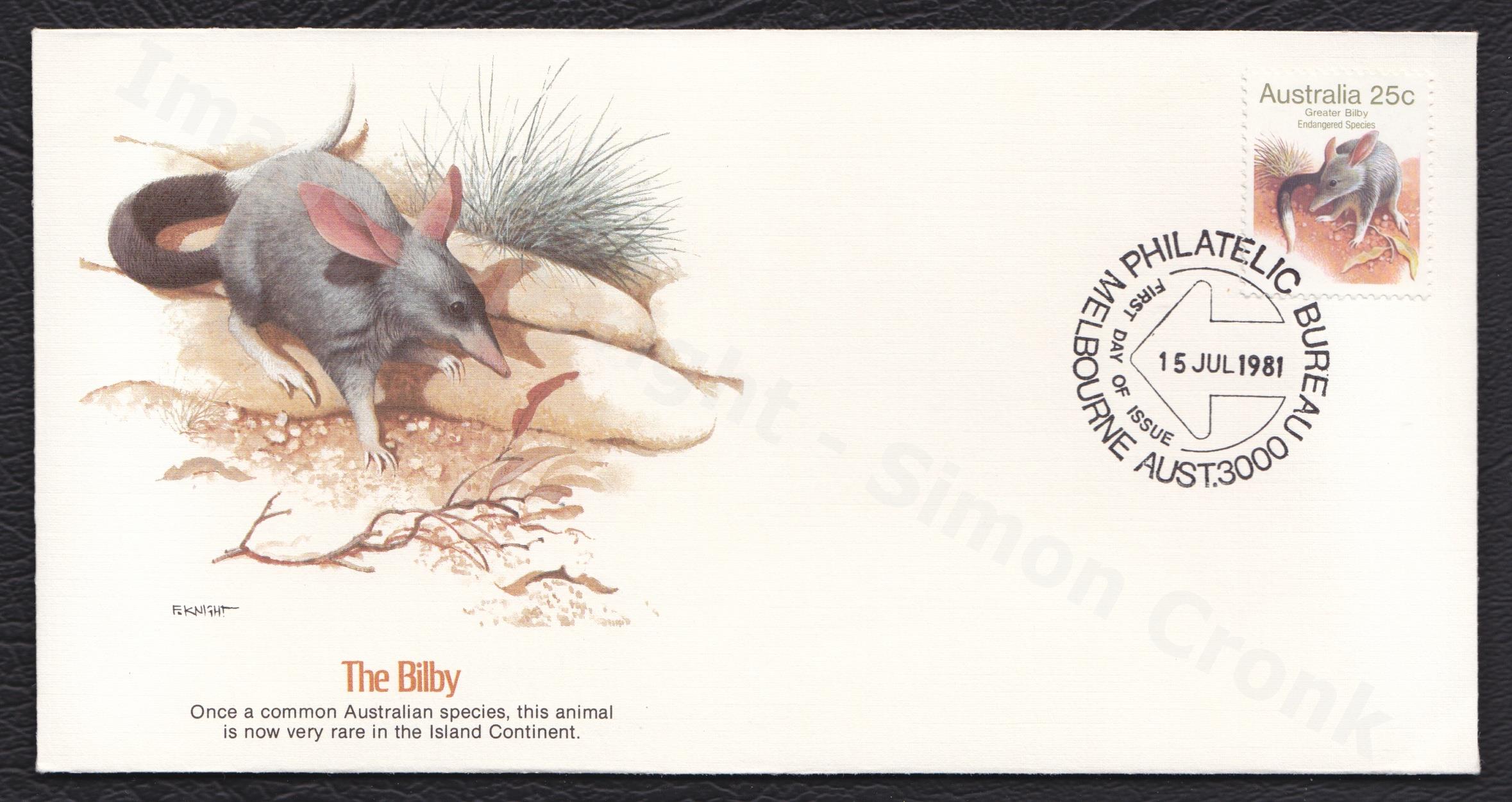 “The Bilby is the largest of several species of bandicoots found in Australia. A shy and nocturnal animal, it prefers to escape the daytime heat by taking refuge in its burrow. This bandicoot is a powerful digger. Its burrow may spiral downwards to a depth of one to two meters and generally has a single entrance concealed by a small bush or tussock of grass. The Bilby is now rare and exists in isolated colonies in arid Australia. In the late 1800’s and early 1900’s the Bilby was considered to be extremely common and lived throughout much of the southern half of the Australian continent. It covered a wide range of dry country from the coast of Western Australia to mid-west New South Wales and southwest Queensland. Early in the twentieth century, its pelts were marketed in great quantities and many fell victim to rabbit traps baits. Predation by foxes and competition with rabbits for burrows are also believed to have contributed to its decline. This species has disappeared from many areas and now survives only in remote colonies with the main concentration in the Northern Territory. Some colonies are included in the Tanami Wildlife Sanctuary in the Northern Territory and the Bilby is protected by law throughout its range. It is classed as Rare by the Inter- national Union for the Conservation of Nature and Natural Resources. Trade in this species is restricted by the Convention on International Trade of Wild Fauna.”

“The Bridled Nail-tailed Wallaby is a medium-sized marsupial of the family of kangaroos (Macropodidae). It is one of three species of nail-tailed wallabies characterized by a whip-like tail, tipped, as the name suggests, with a small horny spur or nail. Its fur is thick, silky and mainly gray in color, with a black center stripe on the back. The underparts are white and there is a broad white stripe across the head and shoulders resembling a bridle. The Bridled Nail-tailed Wallaby is generally found in areas of closed, medium height shrubland with open grassy woodland nearby. Being a timid animal, it feeds in the grassy areas near shrubs where it can take shelter. The Wallaby is most active at night. Although it moves in daylight, most of the day is spent in a shallow nest scratched out beneath a tussock of grass or bush. The Wallaby is shy and tends to be sighted singly, making observation difficult. The Bridled Nail-tailed Wallaby is now extremely rare and is only known to occur in small numbers in an area near Dingo in Queensland. The decline of this species can probably be attributed to the clearing of woodlands and possibly to the introduction of predators such as dogs and foxes. The colonies near Dingo, though small, are well established on two properties but are threatened by further land clearing. The Bridled Nail-tailed Wallaby is listed as Endangered by the International Union for the Conservation of Nature and Natural Resources. Trade in this species is restricted by the Convention on International Trade.” 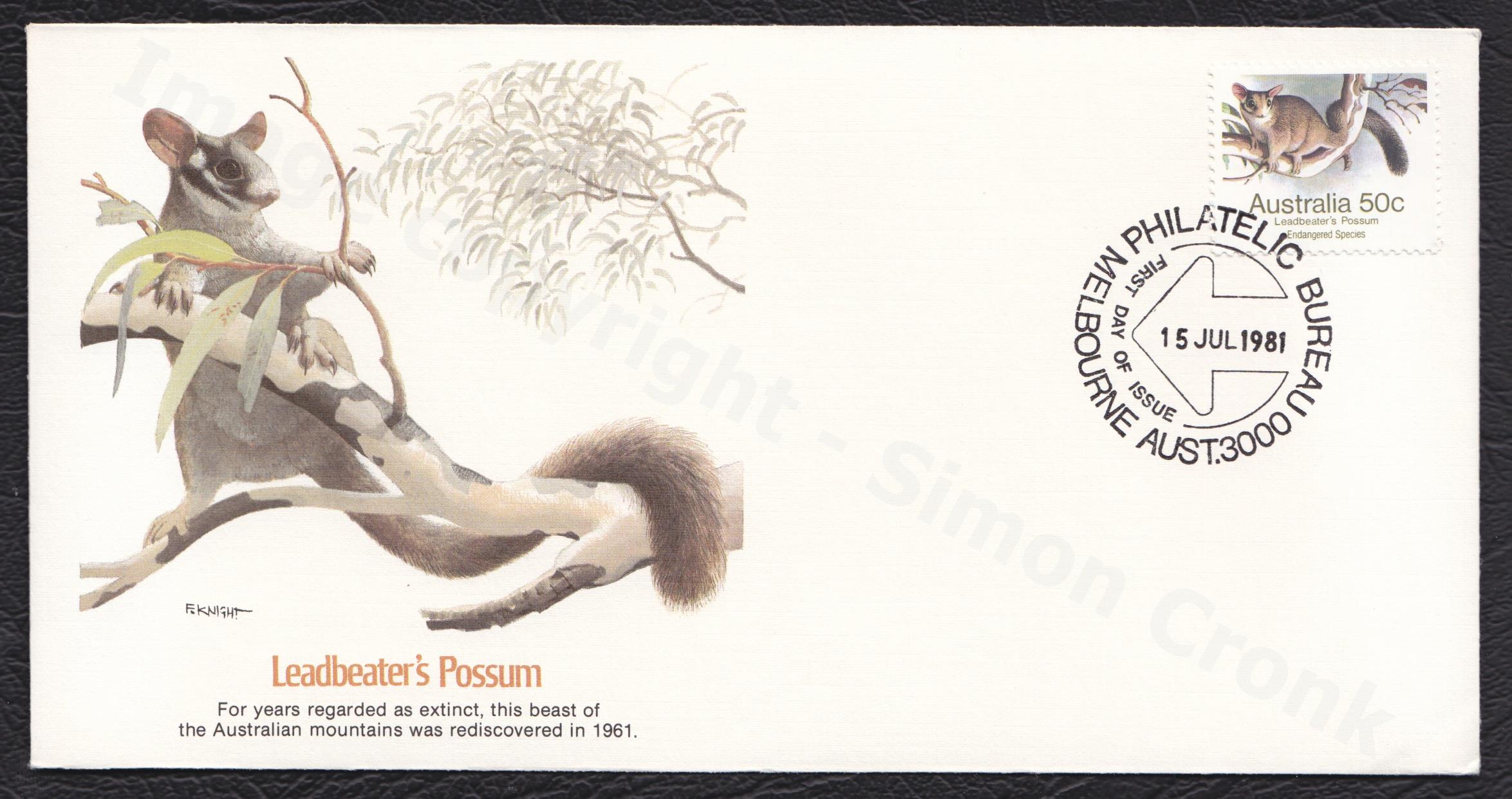 “In 1867, Professor Frederick McCoy, a lecturer in Natural History in Melbourne, wrote about a new kind of small mammal which he had identified in the collection of the National Museum of Victoria. It was a beautiful little animal with a striped face and a long-haired bushy tail. For a new name (and each describer of a new animal must coin one) he combined the name belideus, then currently for Sugar Glider (which means javelin or dart), with gymnos (which means naked). In this way, the name conveyed to scientists McCoy’s belief that the new possum was related to the Sugar Glider but was without the flying membranes, which in the Sugar Glider are spread between wrist and ankle. Through the second name, the professor immortalized John Leadbeater, the taxidermist responsible for preparing the specimens he described. Leadbeater’s Possum is known to exist today in mountain ranges between Lake Mountain and Tanjil Bren. The presence of its remains in the cave deposits of eastern Victoria and in eastern New South Wales suggests that the species may yet be found through the Australian Alps across the Victorian border. Most of the recent sightings have been by members of the Mammal Survey Group of the Field Naturalists’ Club of Victoria. The feeding habits of Leadbeater’s Possum in nature are known only from the dissection of a specimen which was collected soon after it had fed. This animal had been feeding on beetles and crickets. It is probable that the species eats other insects as well.” 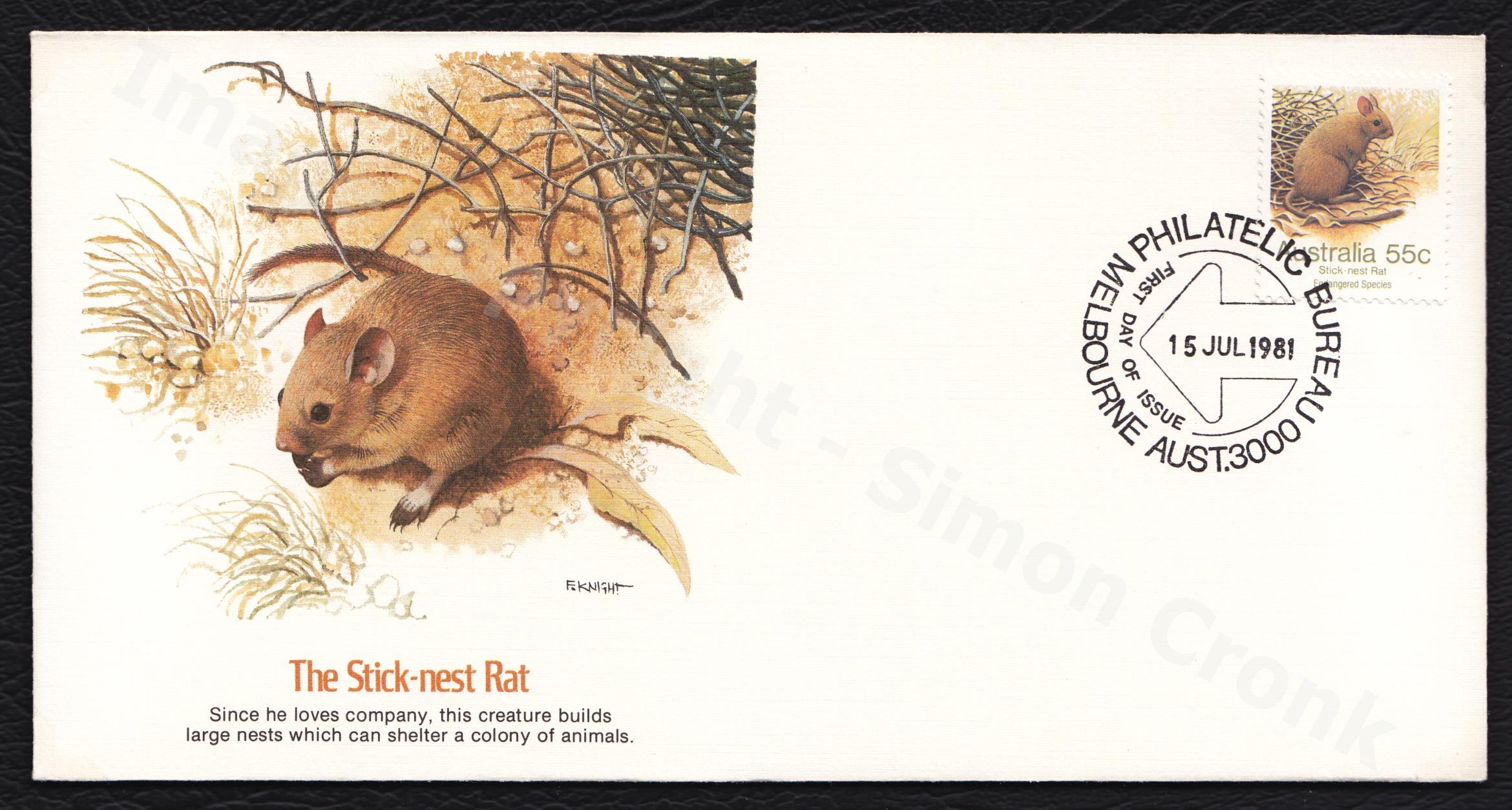 “The Stick-nest Rat is a rodent of the Muridae family and is the only living species of the genus Izporillus. It is a small, furry, rabbit like animal with large eyes, short face and long ears which are held erect. The habitat of the Stick-nest Rat includes woodland, grassland and salt-bush plain. It feeds mainly on succulent leaves and unlike other rats, does not bite when handled, though it may scratch vigorously. The Stick-nest Rat usually builds its nest over small depressions such as the burrows of other animals, using its jaws to carry and drag sticks while steadying them with its forepaws. The sticks are placed carefully, then adjusted from the inside to produce a solid structure. The shape of the nest varies depending on the habitat. For example, where there is support in the form of shrubs, it may be cone shaped. Where there is no it is low and spreading with small sticks support, interwoven into the nests to provide strength. The nests may be built in caves or rock crevices also. Within the nest, passages lead up from a number of entrances to a grass and leaf-lined cavity. The Stick-nest Rat is gregarious. Some large nests may shelter a colony of animals with each family occupying one of a number of interconnected cavities. The nest provides a refuge from predators and extremes of temperature. The Stick-nest Rat once had a wide distribution but is now believed to survive only on Franklin Island off of South Australia.” 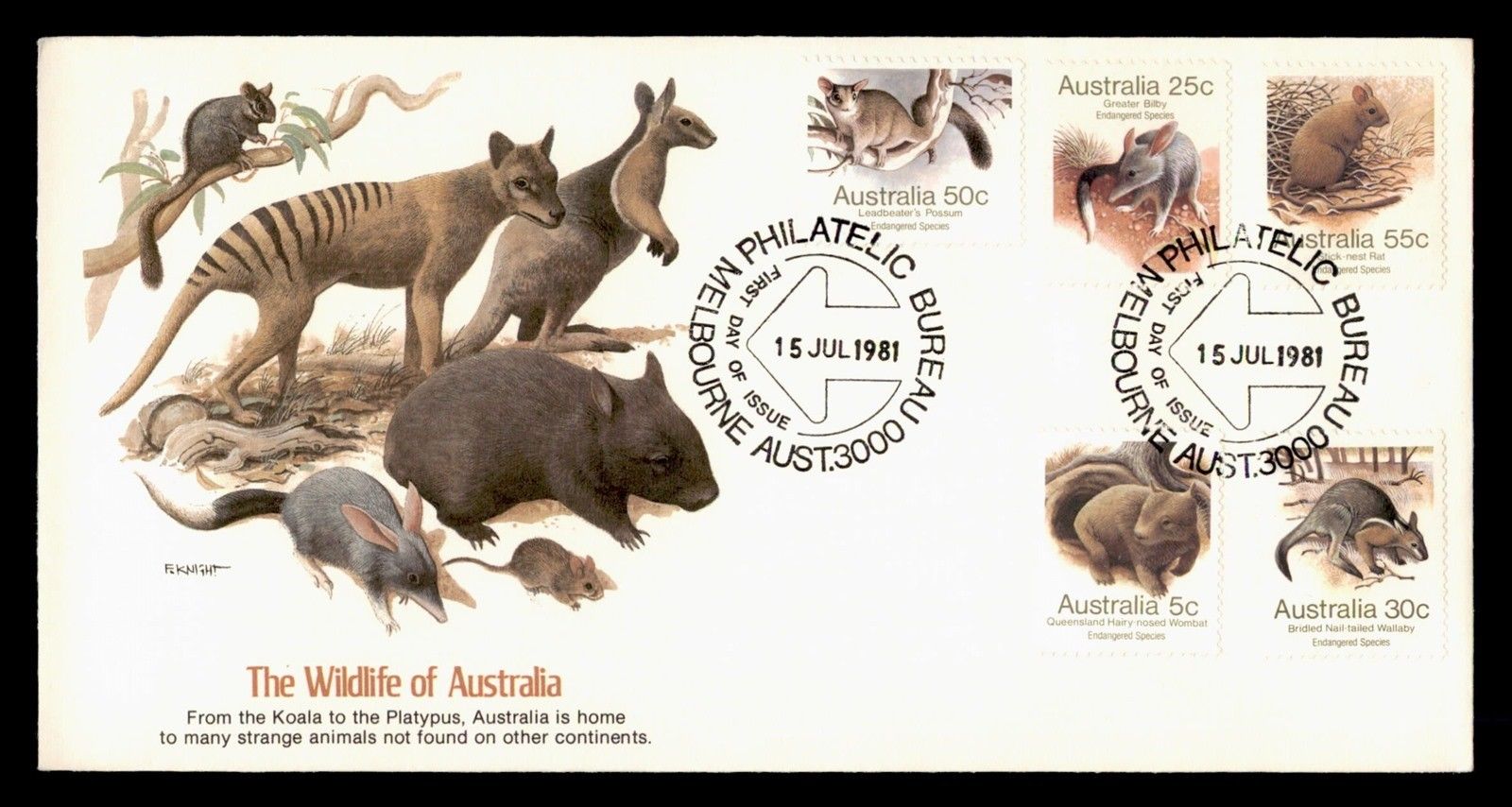 I’m interested in buying a clean example of the 24c Tasmanian Tiger cover and also the full-set on cover to replace my ordinary examples.

The stamps were designed by Frank Knight. Here is some information from the Unicover website:

The 2 ‘Flora & Fauna’ cover cachets were designed by Gene Jarvis. Here is some information from the Unicover website: