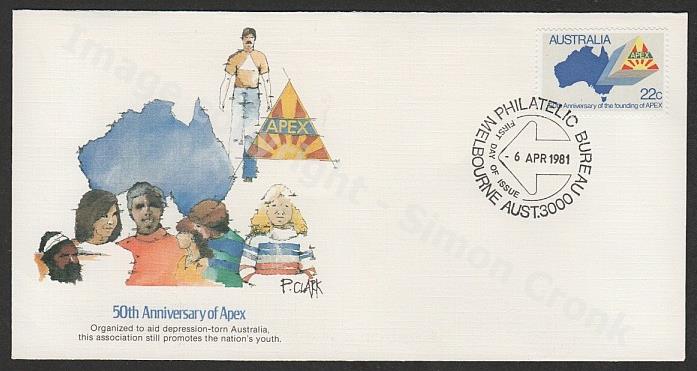 “Fifty years ago, Australia, like most of the world, was in the midst of a tragic economic depression. Her young men daily felt the pain and hopelessness of being without work and the morale of the nation’s youth staggered at an all-time low. Sensing the desperation of their country’s young people, three architects from the Victorian town of Geelong formed the first Apex service club. They believed that a young men’s organisation, such as this, could boost the morale of the depression-torn society and also provide some much needed material comfort for Australia’s needy. The principles these three visionary architects long ago brought to the Apex organisation are still part of the modern Apexian societies. The aims of the service organisation are symbolised by the association’s emblem which is pictured on the stamp on this First Day Cover. The base of the equilateral triangle emblem represents citizenship, and the two sides of the triangle stand for fellowship and service. As an association, Apex has achieved the aims of its founders. That is, it has attacked and resolved many problems which could not be overcome by individual members or even by individual Apex societies. On April 6, 1981, Australia issued the 22c stamp featured on this First Day Cover to honour the fiftieth anniversary of this organization.”

Some more information about the artist Paul Clark from the Unicover website: